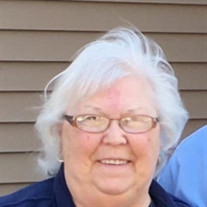 BUXTON - Georgeann E. Morin, 81, died on August 17, 2021 at a long-term nursing facility in Westbrook. She was born in Portland on October 29, 1939, the birth daughter of the late Robert Eugene and Adelaide Keene Sawyer and adopted daughter of Harry and Fannie McFarland, who were also her birth grandparents. She married Theodore “Ted” Morin on September 23,1961. They were married for over 47 years before Ted’s passing in February 2009. Together, they enjoyed camping, playing cards with family and friends and spending as much time as possible with their children, grandchildren. Georgeann worked at Maine Medical Center and NorDx as a phlebotomist and specimen processor for over 30 years before retiring. She was a member of the VFW in South Portland and the Fraternal Order of the Eagles Ladies Auxiliary in South Portland and Portland for many years. She enjoyed painting ceramics, reading, word search books and most of all, spending time with her grandchildren and great grandchildren. In addition to her birth and adoptive parents, she was predeceased by brothers, Douglas, Ricky, and Frank; and sister, Sharon. She is survived by brother, Robert Sawyer and his wife, Barbara of Westbrook and sister, Carolyn Sawyer of Westbrook. Surviving in addition to her siblings are her sons, Rickey Morin and partner, Sarah Warren of Buxton, Douglas Morin and partner, Anna Russo of Westbrook; daughter, Theresa Bruni and husband, David of Buxton; grandchildren, Rickey, Amber and Andy, Hannah and Brett, Kelsey, Aimee and Patrick, Heather and Roger, Vincenzo and Santino; great-grandchildren, Ava, Wyatt, Adalynn and Reid, as well as many cherished nieces and nephews. Visiting hours will be held, 4-6 p.m., Sunday, August 22, 2021 at the Windham Chapel of Dolby, Blais & Segee, 434 River Road, where a memorial service will be held, 10 a.m., Monday, August 23, 2021.

BUXTON - Georgeann E. Morin, 81, died on August 17, 2021 at a long-term nursing facility in Westbrook. She was born in Portland on October 29, 1939, the birth daughter of the late Robert Eugene and Adelaide Keene Sawyer and adopted daughter... View Obituary & Service Information

The family of Georgeann E Morin created this Life Tributes page to make it easy to share your memories.

Send flowers to the Morin family.