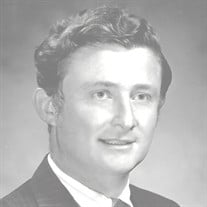 George W. Place, Jr. died peacefully at his home on July 26, 2020. He was born on April 20, 1931, in Ridley Park, Pennsylvania, the eldest child of George William and Anna Beatrice (Machette) Place. He was preceded in death by his beloved wife, Carol W. Place, and siblings Philip Place and Betty Jean Johnson. After graduating from Rutherford High School, Rutherford, New Jersey, where he was an outstanding scholar athlete, he attended Swarthmore College, graduating in 1952. George married Carol W. Place on October 2, 1971. They raised a blended family of six children: Nancy, Elizabeth, Bill, and Robert (from George’s first marriage), John (from Carol’s first marriage) and together they had Andy. Since the summer of 1977 they lived at the family home on Crescent Lake in Raymond, Maine. George was an All American Soccer player whose college career was followed by Army service at the Army Chemical Center. A mechanical engineer by education and training, George enjoyed working in the petroleum, water and concrete industries. George extended his lifelong love of sports to coaching his children’s sports teams and attending their sports events. As an active member of St. Ann’ Episcopal Church George was especially grateful for the spiritual home created there with his church family and Father Tim Higgins. Wherever George went he was the life of the party. He enjoyed welcoming assorted friends and families to his home. He was playful, entertaining, energetic, mischievous and irreverent, always ready to burst into uniquely off-key song. He was undeterred by obstacles that would, and probably should, stop most of us. George and Carol loved traveling together to visit family and explore new places around the world. Most importantly, George’s love for Carol was the core of his life. He extended that love to his family and friends, giving quiet support in times of challenge and participating in boisterous celebration at other times. George is survived by six children: Nancy Kopack and husband Bill of Westbrook, Elizabeth Place and husband Michael Klauer of Landisburg, PA, Bill Place and wife Julie of Pittsburgh, PA, Robert Place and wife Heather of Redding, CA, John Suitor and wife Gail of Boulder, CO, and Andy Place and wife Gina of Westwood, MA; 20 grandchildren (Sam Drucker, Laura Kopack, Karen Kopack, Jim Kopack, Sarah McNally, Emily Sullivan, Benjamin Klauer, Adam Klauer, Grace Klauer, Lucas Klauer, William Place, Allison Place, Jennifer Place, Ryan Place, Elizabeth Suitor, Madison Suitor, Catherine Suitor, Avery Place, Molly Place, and Elly Place); and 14 great grandchildren. The family would like to express its sincere gratitude to The Cedars and Hospice of Southern Maine for their outstanding and compassionate care. A family service was held at his home and a private interment is planned. Donations in George’s memory can be made to the Outreach Programs at St. Ann’s Episcopal Church at 40 Windham Center Road, Windham, Maine 04062.

George W. Place, Jr. died peacefully at his home on July 26, 2020. He was born on April 20, 1931, in Ridley Park, Pennsylvania, the eldest child of George William and Anna Beatrice (Machette) Place. He was preceded in death by his beloved wife,... View Obituary & Service Information

The family of George W. Place Jr. created this Life Tributes page to make it easy to share your memories.

Send flowers to the Place family.