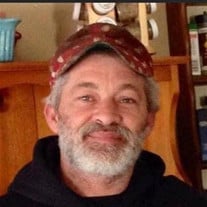 Gary C Perkins Jr. age 49; sadly passed away peacefully at his home in Westbrook, Monday June 1st 2020. Gary was born October 16th 1970 in Rochester, New Hampshire to Gary C Perkins Sr. And Jean “Jeannie” Perkins. Gary spent most of his life in North Waterboro, Maine where he made countless friends and close relationships that would span decades. Gary was well known for his ability to fix anything and especially known for his exceptional mechanical abilities. He found his calling at a young age being a mechanic. He soon started his career with Chets Auto Sales where he would stay for the next 24 years. In that time he made numerous friends and customers, who would travel hours to have him repair their vehicles. In his off time Gary could be found at Beech Ridge Motor Speedway either racing or helping with others race cars. He could also be found in the woods hunting or fishing for hours on end. Gary was a devoted father to his four children and several other children who were “kids to him”. He was also a devoted son, brother, uncle and “Grampy” who loved his family deeply. Gary was predeceased by father Gary Perkins Sr and friend David Spencer. Gary is survived by his mother Jean Perkins of Sanford, Maine; son Gary Perkins III and wife Kayla Perkins of Springvale, Maine; son Nick Perkins and fiancé Janessa Gaston of Westbrook, Maine; daughter Stephanie Clegg and husband Thomas Clegg of Hollis, Maine; daughter Amanda Perkins and boyfriend Justin Dow of Biddeford, Maine; sister Doris Montgomery and husband Carter Montgomery of Sanford, Maine; Jennifer Perkins of North Waterboro, Maine; Colleen Schelling and Savannah Schelling of Westbrook, Maine; Paul Thomas of Saco, Maine; niece Brittany Montgomery of Sanford, Maine; nephew James Montgomery of Sanford, Maine and grandchildren; Emma Perkins, Keegan Perkins, Ryleigh Perkins, Addie Perkins, Aiden Clegg, Carson Clegg, Oliver Dow and Nolan Clegg along with many friends and close relationships. The family will be holding a private ceremony to honor Gary at a later date

The family of Gary Carroll Perkins Jr created this Life Tributes page to make it easy to share your memories.

Send flowers to the Perkins family.