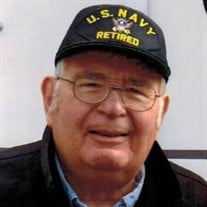 GORHAM - Fred “Ted” Thomas, 89, left us in the early morning hours of June 3, 2021, at the Gorham House, Gorham, Maine with his wife Daisy J. (Tentscher) Thomas by his side. He was formerly a long time resident of Standish, ME and later of Sierra Vista, AZ. He was born in Elizabeth, NJ on September 20, 1931, the son of Edgar W. and Helen S. (Frambes) Thomas. His early education was done in several areas of New Jersey and Pennsylvania, and Oak Ridge, Tennessee. His father was a chemist for the DuPont Company and was transferred where he was needed. The family then moved to Standish, Maine in 1945 where Fred was able to start his high school education at Standish High School. He graduated in 1949. In 1982, he graduated from Husson College with a BS Degree. In 1951, he joined the United States Navy, serving 23 years as a Chief Aviation Electronics Technician. He served in the Korean War, Viet Nam War and Cold War era. After retiring from military service, he found a new career as a Title Abstractor for Richard A. Steeves, Lawyer, (Ret.) of Standish and several local surveyors. He and Daisy were married at NAS Wold-Chamberlain Air Field in Minneapolis, MN on June 2, 1956, and were married 65 years and 1 day. He belonged to the Standish Lodge, No 70 and presently the Presumpscot Lodge No. 70 A.F. & A.M., was a Past President Standish Kiwanis Club, Past President of the Democratic Club of Standish, the Huachuca City Post 10342 VFW of Arizona, the Cochise County (AZ) Gem Club, and various RV Travel Clubs. After both he and Daisy retired they sold their small farm on Oak Hill Rd in Standish, bought an RV and traveled extensively for the next 20 years, making 9 round trips from AZ/CA to Maine, always finding a different road to travel between those points. They made many friends around the country, and the world through their travels and were extremely grateful for the privilege of getting to meet so many wonderful people from all walks of life. He leaves behind his wife, Daisy of the Gorham House; his much loved daughters, Linda Kellett (Stephen, deceased), Susan Beliveau (Tom), Judy Kendrick (Kevin) and Diana Burgess (Steven); his brother, David (Pam); 10 grandchildren; 10 great-grandchildren; and numerous nieces, nephews, and cousins. He was predeceased by his beloved son, Dan (Michelle); parents, Edgar and Helen Thomas; brothers, Charles (Shizue), “Beau” (Arlene); and sister, Suzanne Dolloff (Wesley). The family wishes to extend their gratitude to the Beacon Hospice team of Robin Turner and Pat Healey, the Gorham House staff for their care and guidance of Fred’s care, and so many others for just being there when we needed them. Funeral services will be private for family. In lieu of flowers, please send donations to Beacon Hospice an Amedisys Company, 52 Atlantic Place, South Portland, ME 04106 or Gorham House Activities Dept., 50 New Portland Road, Gorham, ME 04038. To express condolences and to participate in Ted’s online tribute, please visit www.DolbyBlaisSegee.com

The family of Fred E. Thomas created this Life Tributes page to make it easy to share your memories.

Send flowers to the Thomas family.