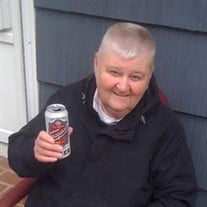 Fred Everett Sawyer, Sr., a longtime resident of Westbrook, died Oct. 4th at Maine Medical Center. Fred was born in Portland, the second of three children born to Wellington and Margaret Sawyer on May 16, 1940. Fred grew up on University Street and as a child attended Portland schools. He left school to work for his father in the trucking industry. He worked countless jobs until he enlisted in the United States Army in 1963. After 18 months of active duty service, his father passed away and he was honorably discharged to go home and take care of his mother and younger brother James. He remained in the Army Reserves for 6 years. While in the Reserves he continued to work countless jobs, including working at Hamlin Sand and Gravel. While making a delivery, he encountered the love of his life, Grace Marie Stiles, who after much persuasion, reluctantly accepted a date with him. Three weeks later, on September 21, 1968, Fred and Grace went on their first date to Beech Ridge Motor Speedway. When the date was over, Fred proposed to Grace who half-heartedly said yes thinking Fred was joking. They married May 3, 1969 and were married 52 years at the time of his death. From 1972-1986, Fred worked at Lyman Moore Middle School as Head Custodian and one of his proudest memories was having the yearbook dedicated to him by the student body not once but twice. A back injury sustained on the job in 1986 forced Fred to stop working. In 1973, Fred and Grace moved to Westbrook where they raised their three sons together, Fred Jr., Marc, and Geoff. Fred loved Westbrook enough that in 1987, he went back to school and obtained his GED at the age of 47. Fred was an avid auto racing fan, particularly short track racing. He was introduced to it by his father after his sister Jean’s death in 1950 and it quickly became his first passion. Every Saturday night he could be found at either Beech Ridge Motor Speedway, Oxford Plains Speedway, or Wiscasset Speedway with his wife and kids. He travelled numerous times to out of state tracks in New York, Connecticut, New Hampshire, and Massachusetts. He was passionate about open-wheeled racing, specifically modifieds and super modifieds and idolized 9-time NASCAR modified champion Richie Evans. If auto racing was his first passion, supporting his son’s (and grandchildren’s) athletic activities were a close second. Fred was particularly fond of high school basketball, with his favorite time being during the high school tournament season. He loved attending games at the Cumberland County Civic Center and Portland Expo. He was always tuning in to MPBN to see the games from Augusta or Bangor. Year after year he would recount Mike Thurston’s shot for Caribou against Westbrook during tourney season. . When his sons began coaching, he would travel all over the state to support their teams. He always supported his beloved Blue Blazes and was honored by the Westbrook coaching staff with a lifetime achievement fan award with his wife Grace. Fred was predeceased by his sister Jean, his father Wellington, and his mother Margaret. Survivors include his wife of 52 years Grace Marie (Stiles) Sawyer of Westbrook, daughter Kimberly Twardziak and husband Rick of Pelion, SC, daughter Sandra Low and husband Jason of Cary, NC, son Fred Jr. of Freedom, NH, son Marc and wife Kathryn of Scarborough, son Geoff and wife Noelle of Westbrook, 13 grandchildren and 2 great-grandchildren. He is also survived by his brother James Sawyer of Old Orchard Beach, and many nieces, nephews, and cousins. The family would like to thank the staff of Maine Medical Center for the wonderful care, dedication, and compassion they gave Fred during his final days. Visiting hours will be Monday, October 11th from 3:00pm-6:00pm at Dolby, Blais, and Segee Funeral Home, 35 Church St. Westbrook, ME 04092. Funeral will be Tuesday, October 12th at 11:00am followed by a full military burial at Woodlawn Cemetery. In lieu of flowers, donations can be made to: Maine Veterans Homes 310 Cony Road Augusta, ME 04330

Fred Everett Sawyer, Sr., a longtime resident of Westbrook, died Oct. 4th at Maine Medical Center. Fred was born in Portland, the second of three children born to Wellington and Margaret Sawyer on May 16, 1940. Fred grew up on University... View Obituary & Service Information

The family of Fred E. Sawyer Sr. created this Life Tributes page to make it easy to share your memories.

Send flowers to the Sawyer family.