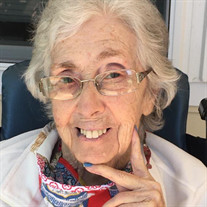 Frances M Roberts, 88, of Gorham, passed away peacefully on August 3, 2020 at Gorham House. She was born on March 8, 1932 in Kittery Point, ME, the youngest daughter of Eleanor and John Sherman Waldron. Frances graduated from Traip Academy and went on to marry Frederick G. Grant. They were married for 19 yrs. and together they had five children. After her first marriage, she went on to marry Bradford P. Roberts and they were together for 32 years until he passed. She worked at the Gorham IGA for several years and was a homemaker and a caregiver to others. She was a Worthy Patron and Gold Sheaf member of Mt. Etna Grange in North Baldwin, where she was a Past State Deputy. She was a member of the Grange for over 60 years. She served on several committees at local, Pomona, and state levels. In her free time she took great joy in knitting and sewing. She loved to make hats and mittens to give away to anyone that she felt needed them. Frances leaves behind her children; Stephen Grant of VA, William Grant of FL, Patricia Grant-Swift, of NC, Jeffrey Grant, and his wife Jennifer of Gorham, Timothy Grant, and his wife Ramona, of Pownal, and stepson B. Scott Roberts, and his wife Kelly, of MD. She also leaves behind her grandchildren; Christopher Grant, Brandi Crisco, William Tschopp, Thomas, Samantha, and Travis Grant, Adam-James, Zachary, Andrea, and Hunter Grant, Patricia Donahue, Kelsey Metzer, Morgan and Kristy Roberts, and twenty great grandchildren, along with many nieces and nephews. She was predeceased by her parents, her husband Bradford, her sisters Annie Currier and Jessie Kalix, and great grandson Mason Donahue. The family would like to thank Gorham House and its staff for the wonderful care that she received in the four and a half years she spent there. We would also like to thank Compassus Hospice Care for their care and support. Services for Frances will be private at a later date. In lieu of flowers, please donate to the activities fund at The Gorham House.

Frances M Roberts, 88, of Gorham, passed away peacefully on August 3, 2020 at Gorham House. She was born on March 8, 1932 in Kittery Point, ME, the youngest daughter of Eleanor and John Sherman Waldron. Frances graduated from Traip Academy... View Obituary & Service Information

The family of Frances M. Roberts created this Life Tributes page to make it easy to share your memories.

Frances M Roberts, 88, of Gorham, passed away peacefully on August...

Send flowers to the Roberts family.