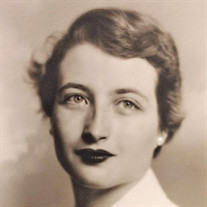 FALMOUTH - Esther Colby Hillman, 95, died March 23, 2022, at Falmouth by the Sea in Falmouth, ME after a long period of declining health. She was born September 3, 1926, in Bangor, ME, the only daughter of Harold Henry and Hildred Mary (Oliver) Colby. She graduated from Fryeburg Academy in 1945, attended Beal College, then worked successively at Merrill Trust Co. in Bangor and the Admissions Office at the University of Maine in Orono, ME. On March 13, 1949, she married Frederick “Jim” Evans Hillman in Bangor, ME. They initially made their home in Bangor where Mr. Hillman worked in his family’s dairy business, and Esther learned more about dairy cows than she thought possible. In 1960 her husband pursued a career change in telecommunications that took the family to locations in Maine and Massachusetts, returning to Maine for good in the late 1960’s. Esther worked briefly at WLBZ in Bangor while her children were in college. She was an accomplished knitter and needle pointer. She learned to stencil various surfaces, creating beautiful pieces for her home and family. She was a great cook and baker. She spent many summers and falls canning fruits and vegetables from gardens she and her husband tended. She loved to read and tend her flower gardens. She was active in the Bangor Garden Club for many years. Another of her passions was genealogy, a pursuit for which she spent many hours researching and documenting family history. Esther was very active in the Francis Dighton Williams chapter of the Daughters of the American Revolution, having served as chapter regent and treasurer. She was a life-long animal lover. Her succession of dogs and cats were well-loved, if not always well-behaved. Esther attended the Hammond Street Congregational Church in Bangor, ME, starting with Sunday school as a child and continuing through her marriage there and the christening of her children there. She was one of the oldest members of the congregation. In addition to her parents she was predeceased by her son, Frederick Colby Hillman in 1986; her beloved husband of 56 years in 2005; and her brother, Malcolm Oliver Colby in 2009. She is survived by her daughter, Kathy Hillman Reed and her husband, Stan Reed of Falmouth, ME; daughter-in-law, Debbie (Wiley) Hillman and her partner, Don Favreau of Lewiston, ME; special niece, Cynthia Hillman-Forbush and her husband, Jack of Houlton, ME; grandson, Thomas Frederick Reed and his wife, Kendall of New York City; grandson, Douglas Howe Reed of Portland, ME; and great granddaughters, Lily Conway Reed and Caroline Colby Reed of New York City; as well as several extended family members. The family would like to thank the staff at Falmouth by the Sea for their kind and compassionate care during the last 5 years. A private service for the family at Pine Grove Cemetery, Bangor will be held in the spring.

FALMOUTH - Esther Colby Hillman, 95, died March 23, 2022, at Falmouth by the Sea in Falmouth, ME after a long period of declining health. She was born September 3, 1926, in Bangor, ME, the only daughter of Harold Henry and Hildred Mary (Oliver)... View Obituary & Service Information

The family of Esther Colby Hillman created this Life Tributes page to make it easy to share your memories.

Send flowers to the Hillman family.