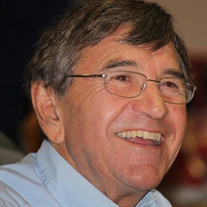 GORHAM – Erland A. Cutter, 73, passed away peacefully at home on the morning of November 23 with his loving wife at his side. Earl had been bravely fighting Multiple System Atrophy (MSA) for over nine years and had made peace with his illness by living a remarkable life surrounded by love and laughter. His spirit remained strong despite the impact of the disease on his body. Erland Alfred Cutter was born October 6, 1947, the third son of Clifford and Dorothy (Rousseau) Cutter. He grew up in Westbrook where he was an Eagle Scout, A Little League catcher, an accordion player, Valedictorian and Class Wit of the Westbrook High School Class of 1965. As a student he was active in Key Club, served as the school correspondent for the Westbrook American, played in a student band called the Six Situations, and won an S.D. Warren Scholarship to attend Bowdoin College. At Bowdoin, Class of 1969, Earl majored in French Literature and was a James Bowdoin Scholar. Upon graduation, he considered entering the priesthood and spent a summer living and working at Bowdoin’s Newman Center. Always deeply religious, Earl never missed Mass and served as a lector at St. Hyacinth’s in Westbrook for many years. He served in the U.S. Army, then began a distinguished 37-year career as a teacher at his alma mater, Westbrook High School. He served as the language department chairman for many years, mentoring fellow teachers, until his retirement in 2008. As an educator, “Mr. C” was revered by his students who later in life sent him letters expressing affection and deep appreciation. He taught French and Latin but he always used language instruction and literature as a means of inspiring students to be intellectually curious. As Jeff Stone, WHS ’73, wrote recently, “Earl was a fantastic teacher, so smart, funny, engaging, irreverent, a true lover of literature and language who also clearly loved his students. He was definitely the coolest, wittiest teacher at WHS.” For many years, Earl served as the Voice of the Blue Blazes, announcing basketball, soccer and football games. When he retired, the broadcast booth at Westbrook High School’s Olmsted Field was named for him. Former student-athletes have shared their fond memories of his distinguished voice during their time on the field. In 1980, Earl married Judy LeBel, and created a beautiful family and life together. A devoted father, he experienced the joy of coaching and teaching all three of his children, Ben, Drew and Megan, and supported all of their academic and athletic endeavors. Earl held dearly in his heart those moments that included his family, such as trips to his beloved Paris where he met and fell in love with Judy, ice fishing at his brother Warren’s camp, and simply sitting around a Sebago campfire sharing stories and laughter, all with the music of Dylan and Kristofferson playing in the background. He was a passionate Boston sports fan, and family trips to Fenway Park remained some of his most cherished memories. Earl was happiest spending long summer days at the family camp at Sebago Lake surrounded by family and friends, or sitting quietly on the beach working on a NY Times crossword puzzle. After a family meal, his signature farewell to his children was always, “I love you, come again.” Earl remained close to his childhood friends, who created their “Out to Lunch Bunch”. This loyal group of friends included Edgar Beem, Roland Quinlan, Bob Smyth, and the late Chris Couch. They enjoyed each other’s company every week over lunch in a variety of locations throughout southern Maine. Earl and Judy were grateful for such supportive and loyal friends. “Earl’s determination and courage in the face of such a terrifying disease was truly amazing,” wrote Bob Smyth. Despite this ugly disease, Earl never complained and never allowed his disabilities to define him. A true inspiration to all, Earl maintained his positive attitude and irreverent wit right to the very end. When asked how he was coping with his illness, he never said “Why me” but always humbly responded, “Why not me”. Even years after retiring, Earl continued to teach us important life lessons in the way he carried himself. Earl is survived by his wife Judy, who lovingly cared for him at home during his illness, the couple's three children; son Ben and wife Marissa of Standish, son Andrew and wife Laura of Portland, and daughter Megan and fiance Anthony Savino of Windham. He was the loving Papa to Grady, Haley, Hazel, and Dominic. Earl is also survived by his older brothers Wayne of Muskegon, MI, Warren of Limerick, ME, and several nieces and nephews. He was predeceased by his parents. The family would like to extend special thanks to Beacon Hospice for their compassionate care. The family will be holding a private Mass of Christian burial at St. Anthony’s Parish in Westbrook. A Celebration of Life will be held next Summer. In Lieu of flowers donations may be sent to: Westbrook School Department Attn: Earl Cutter Memorial Scholarship Fund 117 Stroudwater St. Westbrook, ME 04092. To view the live stream of Earl's Mass of Christian Burial on Wednesday December 2nd at 10am, please click: https://zoom.us/j/99051898817

GORHAM &#8211; Erland A. Cutter, 73, passed away peacefully at home on the morning of November 23 with his loving wife at his side. Earl had been bravely fighting Multiple System Atrophy (MSA) for over nine years and had made peace with his... View Obituary & Service Information

The family of Erland Alfred Cutter created this Life Tributes page to make it easy to share your memories.

GORHAM –
Erland A. Cutter, 73, passed away peacefully at home...

Send flowers to the Cutter family.