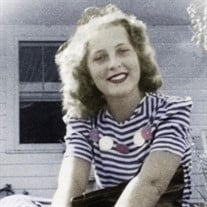 Elizabeth J. Miller (Liz, Betty), widow of David Miller Jr., passed away peacefully on August 7, 2020, with family at her side. Elizabeth was born on October 14, 1928, in Charleston, South Carolina, the daughter of the late Olga (Doscher) Jones and Shelton Jerome Jones, Sr. Elizabeth grew up in Charleston and Walterboro, South Carolina. She met the love of her life, David, during World War II when he was stationed in South Carolina. After the war, Elizabeth and David moved to Westbrook, Maine, where they raised their three children: David, Stephen, and Kristine. Elizabeth was active in local politics and many women’s clubs. She enjoyed bowling, playing golf, watching the Red Sox, and gardening. She was particularly fond of roses. She was a longtime member of Trinity Lutheran Church in Westbrook and also a member of Trinity Lutheran Church in Elloree, South Carolina. Retirement brought a move for David and Betty to Santee, South Carolina. Happiness was found playing golf, socializing with friends and family, and the absence of snow. In 2011, she returned to Maine to be close to her family. Elizabeth was predeceased by her husband, David, her daughter-in-law Elaine Miller, her granddaughter Emily White, and her grandsons: Jeffrey Miller and Jairus Miller. She is survived by her two sons: David Miller III and his wife Deborah, and Stephen Miller, and by her daughter Kristine White and husband Robert. She is also survived by four grandchildren: Lisa Bertsch and husband Guy, Matthew White and wife Melissa, Elek Miller and wife Kim, and Gregory White. Additionally, she is survived by three great grandchildren: Zoe Bertsch, Charlotte Miller, and Henry Miller, as well as many nieces, nephews, great nieces and great nephews. A graveside service and Celebration of Life will be held at a later date in Islesboro, Maine. In lieu of flowers, donations may be made to Gosnell Memorial Hospice House, the Animal League of Greater Portland, or to a charity of your choice.

Elizabeth J. Miller (Liz, Betty), widow of David Miller Jr., passed away peacefully on August 7, 2020, with family at her side. Elizabeth was born on October 14, 1928, in Charleston, South Carolina, the daughter of the late Olga (Doscher) Jones... View Obituary & Service Information

The family of Elizabeth J. Miller created this Life Tributes page to make it easy to share your memories.

Send flowers to the Miller family.