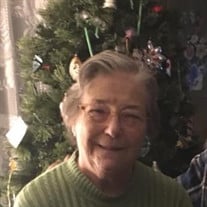 Eileen Ring, 80, of Gorham, passed away at home surrounded by her family on August 5, 2020. She was born in Methuen, MA on September 5, 1939 to parents Bernard and Luette (Morrill) Hollins. Eileen was a loving friend, daughter, sister, wife and mother. Her love shined it’s brightest as “Grandma”. You could always count on a hot cup of tea and western movie playing on the television while doing her current craft or quilting project. Eileen also enjoyed camping most of her life and taking rides in the country. Her love of children was so great that she became a foster parent for over 15 years. She was a bus driver for almost 40 years between Gorham, Westbrook, and Scarborough Maine as well as Columbia, South Carolina. She enjoyed her job and looked forward to holidays and passing out treats to her school bus children. People never went hungry with Eileen, there was always enough and plenty of room at her table. Eileen is survived by her children and their families; Cherylanne Dumont, and her three children, four grandchildren, and three great grandchildren; Michael Currier, and his three children and five grandchildren; James Currier, and his daughter; Richard Currier, and his three daughters and nine grandchildren; Paul Hutton, and his four children and three grandchildren; Matthew Hutton, and his seven children and one grandchild, and Maryanne Alhamdany and her son. She is also survived by 4 brothers and three sisters. As well as all the friends of the family that called her ‘Mom”. Eileen is predeceased by her parents, her step daughter, Diane Nicholson, her four previous husbands, Eugene Currier, Richard Hutton, Robert Milot, and Willard Ring. A memorial service will be held at 12:00pm on Sunday, August 16, 2020 at the Westbrook Chapel of Dolby Blais Segee, 35 Church St, with an hour of visitation starting at 11:00am. A luncheon in celebration of Eileen’s life will be announced at the memorial service.

Eileen Ring, 80, of Gorham, passed away at home surrounded by her family on August 5, 2020. She was born in Methuen, MA on September 5, 1939 to parents Bernard and Luette (Morrill) Hollins. Eileen was a loving friend, daughter, sister, wife... View Obituary & Service Information

The family of Eileen Mary Ring created this Life Tributes page to make it easy to share your memories.

Eileen Ring, 80, of Gorham, passed away at home surrounded by...

Send flowers to the Ring family.