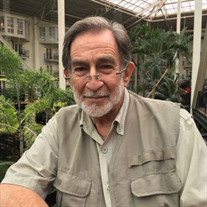 Edwin Max Hoyt, age 81, entered eternal life on Friday, April 29, 2022. After several months of declining health, he passed peacefully with his loving wife, Sharon, and family by his side. Known as Max by family and friends, he was born to Dr. Herman and Harriett Hoyt of Winona Lake, IN on January 13, 1941. Max will be remembered by many of his Warsaw High School classmates as having a passion for music and the trumpet. He excelled in the marching & concert bands and often played at the pep rallies. His love of music spilled over into theater, once playing the lead part of Tevye in the musical, Fiddler On The Roof. In addition to music Max was an avid photographer and gifted many of his photographs to family and friends to be cherished for years to come. After a long career spanning more than 40 years, Max retired from R.R. Donnelley & Sons Company in Lancaster, PA and set his sights on living a peaceful life in New Hampshire. A few short years later he met and married his devoted wife of 9 years, Sharon. The two settled in Maine where they currently reside in Windham. Their favorite pastimes included eating out and sitting side-by-side holding hands. Active in Galilee Baptist Church, Max was proud to be a part of the security team. Max was preceded in death by his father, Dr. Herman Hoyt, his mother, Harriett, and his brother, Joe. He leaves behind his wife, Sharon and her family, and his three children, Greg Hoyt, Alli (Greg) Hamilton and Marcy (Gabe) Traylor as well as 5 grandchildren. Please join us in celebrating Max’s life. Visitation is on Friday, May 6, 2022 between 12:00pm to 2:00pm at Dolby, Blais, Segee Funeral Home, 434 River Rd, Windham with a burial immediately following at Highland Cemetery in Buxton. A memorial service will be held at 11:00 am on Saturday, May 7, 2022 at the Galilee Baptist Church in Gorham, 317 Main Street. In Lieu of flowers, please consider donating to the Alzheimer’s Foundation of America at alzfdn.org or Galilee Baptist Church of Gorham at galileebc.org.

Edwin Max Hoyt, age 81, entered eternal life on Friday, April 29, 2022. After several months of declining health, he passed peacefully with his loving wife, Sharon, and family by his side. Known as Max by family and friends, he was born to... View Obituary & Service Information

The family of Edwin Max Hoyt created this Life Tributes page to make it easy to share your memories.

Send flowers to the Hoyt family.