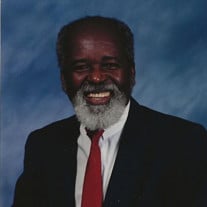 Rev. Dr. Edward F. Grant, 79, passed away peacefully at his home, January 1, 2021. Although he attained the highest degree of education, he preferred to be called Pastor Ed, or simply “Ed”. Born just outside of Georgetown, Guyana, South America, Ed grew up on a coconut farm with his five sisters. As a kindhearted youth, his joy for reading and curiosity of world history drove him to excel in the classroom. Ed’s academic journey had only begun in Guyana, as he immigrated to the United States in his late 20’s on an academic scholarship to Azusa Pacific College in California. He would go on to earn his Bachelor's degree (magna cum laude), the 1969 and 1970 Award for Outstanding Student of the Year in Philosophy, and the 1970 Award for Student of the Year. After achieving both Master of Divinity and Master of Theology degrees in 1973 from Asbury Theological Seminary, Ed earned his Doctorate of Ministry in 1986 from Andover Newton Theological School. His doctoral thesis, written on The Beatitudes (Matthew 5:1-12), was “the point of life is to be a blessing to one another.” Upon graduation Ed began what would become a distinguished 33-year career as a pastor for the New England Conference of the United Methodist Church. Wherever he went during his career Ed was recognized as an upstanding member of the community who was beloved for attracting crowds of all colors, shapes, and sizes. Ed pastored churches in every state in New England, and was often the first African American minister to serve in several of the congregations he pastored. Parishioners were intrigued by his Caribbean accent, and inspired by his sermons and prayers. One of Ed’s common practices, was to begin Communion Service by singing Kum-Ba-Yah, inspiring the congregation in anticipation of this sacred event. Along with pastoral responsibilities, Ed initiated Bible Studies, assisted in supporting and working with youth, and initiated Youth Sunday, where the church’s youth would lead the worship service. Ed enjoyed participating in every part of church activity, and was always happily a part of the church dinners and celebrations. As a member of the New England Conference, Ed was involved in various committees, including the Africa Task Force, the Caribbean Ministers Fellowship, and co-coordinated the hosting of several African ministers to New England. Ed was ecumenical at heart, and enjoyed working with a diversity of clergy for holidays and community events. Ed was a proud U.S. citizen and humanitarian, who considered himself a “Citizen of the World''. He always had a respect for other cultures and was a champion of charitable and progressive policy throughout his lifetime. Ed’s childhood fascination with reading came full circle as, during his career and retirement, he authored four books, and was working on the fifth at the time of his passing. Consistent with the way he lived his life, his books were written in a manner that relayed wisdom and moral guidance to people of all cultures, religions, and walks of life. Ed was a devoted father who cheered for his son, Edwin, with pride, and supported his teammates whole-heartedly on and off the sports fields. He was a respected role model in the community. Ed was immensely proud of his son’s collegiate achievements, and was overjoyed upon becoming a grandfather to his grandson, Eddington. Ed was a kind and gentle man, intellectually gifted, but never pretentious or condescending. In most interactions, he focused the conversation on the person to whom he was speaking. Ed was a gifted listener. He counseled people, and appeared in court as a positive character witness for a teenager in his congregation who, as he said to the judge, who expressed his high respect for Rev. Grant, “was in the wrong place at the wrong time.” To many, Ed was more than a pastor. Ed was a friend. Edward was predeceased by his sisters, Jean, Velma, Urlean, and Merle. Ed is survived by his wife, Edwina; his son and family, Edwin, Haley, and grandson, Eddington; our beloved Patrick; sister, Irma; our beloved, Nadjia and family; niece, Penelope; nephew, James and family; extended family in Guyana, New York, England, and Canada; and dear friends from New England and around the world. A Memorial Service will be held at the Westbrook-Warren Congregational Church in Westbrook on Saturday, February 27th, at 2:00pm. Snow date is Sunday, February 28th, at 2:00pm. Due to COVID-19 requirements, if you plan on attending, please RSVP by contacting: Edwina Grant (207-671-0984) or email [email protected] Masks and social distancing will be in effect. Thank you.

Rev. Dr. Edward F. Grant, 79, passed away peacefully at his home, January 1, 2021. Although he attained the highest degree of education, he preferred to be called Pastor Ed, or simply &#8220;Ed&#8221;. Born just outside of Georgetown, Guyana,... View Obituary & Service Information

The family of Rev. Dr. Edward Frederick Grant created this Life Tributes page to make it easy to share your memories.

Send flowers to the Grant family.