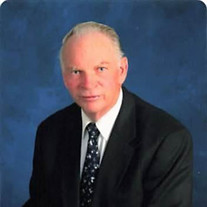 Edward August Ahlquist joined his beloved wife, Patricia, in heaven on January 7, 2022. Born on August 27, 1929, Eddie was the last remaining child of Rudolph Emanuel Ahlquist and Marjory Chadbourn Ahlquist. He was predeceased by his siblings Florence (Link), Earle, Leroy, and Pauline (Ferrara). Raised on a farm on Beech Ridge Road in Scarborough, he was a graduate of Scarborough High School. He attended Gorham State Teacher's College on an ROTC scholarship and earned his bachelor's degree in teaching. Later in life he attended UMO, receiving his masters plus 30 in education. Eddie met the love of his life, Patty, at Tom's Restaurant in Westbrook, Maine and they were married on June 30, 1951. Over the next two years they were separated while he served his country in the United States Navy in Korea as well as many other parts of the world. During that time, Patty gave birth to their daughters Pearl (Douglas) and Gayle (Pooler). After his active duty was over, he returned to "The Ridge" where their son Rudolph Ahlquist Il was born, eventually settling in south Gorham where he lived until the age of 91. There he started his vegetable farm and Christmas tree business, while teaching at Deering High School. After retiring from teaching and as a Lt. Commander in the US Navy, he made the farm a full-time business. He loved working the land and his greatest pride was selling, bartering, or giving quality, fresh products to everyone. He also enjoyed selling Christmas trees, boughs, roping, and wreaths from his farm, both in Portland and at his home in Gorham. An avid hunter and fisherman, he loved spending time at his camp on Richardson Lake that he built with his friend and father-in-law, Ernest "Bunk" Weeman. He often brought home a deer from his many hunting trips, but he was most proud of the one and only moose hunting trip he took along with his son Rudy and grandson Gregory. He bagged a 1000+/- pound moose which provided many good meals for the family. Ed loved spending time with his family as it grew. His grandchildren Douglas (Shirley), Katherine Swaine (Allen), Abigayle Pooler (Emma), Joshua Ahlquist (Kasey), and Gregory Ahlquist (Shaylene) gave him many hours ofjoy. His 10 great-grandchildren kept him busy! Each of them has many memorable times with him and nanny. A humble man about discussing his accomplishments, he was never shy to proclaim his love of his Lord and the need to accept His gift of life. He joined the Gideons and went to Japan and Haiti to distribute Bibles and gave thousands to graduating Seniors here in Maine. He attended New England Bible college at age 60, earning his theology degree. He was ordained at Turner Baptist Church where he was Pastor Ed for I0 years. Though Dad wore many hats, his greatest love was for the Lord and his family was his greatest joy. We invite you to celebrate his life with us on January 15, 2022 at I I a.m. at Living Stone Community Church, 71 1 Ossippee Trail (Route 25), Standish, Maine. A light luncheon will follow the service. We will be following all Covid safety procedures. In lieu of flowers donations can be made to Alzheimers Research.

Edward August Ahlquist joined his beloved wife, Patricia, in heaven on January 7, 2022. Born on August 27, 1929, Eddie was the last remaining child of Rudolph Emanuel Ahlquist and Marjory Chadbourn Ahlquist. He was predeceased by his siblings... View Obituary & Service Information

The family of Edward August Ahlquist created this Life Tributes page to make it easy to share your memories.

Send flowers to the Ahlquist family.