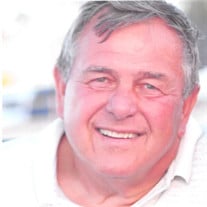 NAPLES - Edmund D. Lipson, 75, originally from Lynn, MA, passed away on December 27, 2020 at his home in Naples, ME where he resided for the past 31 years. He was born on September 18, 1945 to parents Edmund and Sophie (Hincman) Lipson in Salem, MA. Edmund graduated from St. Mary’s High School in Lynn, MA in 1963 and went on to attend Boston College, where in 1966 he became the football team captain before graduating in 1967. After college, Edmund served six years in the army reserves as an Army Green Beret. He was on the board of directors at Unified Federal Credit Union for ten years and worked for 33 years at Osram Sylvania in Danvers, MA before retirement in 2001. Edmund dedicated many hours organizing Beano at Sacred Heart Church in Lynn and Bishop Fenwick High School in Peabody, MA. He devoted his retirement years volunteering in local food pantries. Edmund leaves behind his beloved wife of 52 years, Patricia Wiswall Lipson. In addition to his wife, he is survived by his children; Edmund, and his wife Theresa Lipson of Cape Elizabeth, ME, Lynda and her husband Brian Blutreich, of Phoenix, AZ; grandchildren, Jeremy and Chelsea Thacker of Raymond, ME, Brock of North Conway, NH; granddaughters, Brooke and Logan Blutreich of Phoenix, AZ. Edmund also leaves behind six great grandchildren; his sister, Dorothy Owen and her husband, John of Wakefield, MA; special niece, Sara Owen Kasper and her husband, Dr. Isaac Kasper of Beverly, MA and special nephew, Jonathan Owen and his wife, Maggie of Kennebunk, ME as well as several other nieces, nephews, grandnieces and grandnephews and many several dear friends. In lieu of flowers, donations may be made to the Good Shepard Food Bank, 3121 Hotel Road, Auburn, Maine 04210.

NAPLES - Edmund D. Lipson, 75, originally from Lynn, MA, passed away on December 27, 2020 at his home in Naples, ME where he resided for the past 31 years. He was born on September 18, 1945 to parents Edmund and Sophie (Hincman) Lipson in Salem,... View Obituary & Service Information

The family of Edmund D. Lipson created this Life Tributes page to make it easy to share your memories.

Send flowers to the Lipson family.