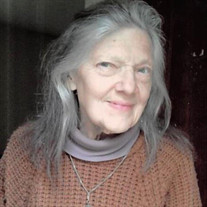 PORTLAND – “Oma” passed away peacefully at her home on April 21, 2021. Trudy was born in Germany on September 27, 1936. She was the daughter of George and Marie (Kowalski) Koerner. She was educated in Germany, became a United States citizen, and married William G. Seidel of Portland in 1959. Together they raised four children in Portland. Trudy enjoyed gardening, cooking German dishes, baking, classical music, and sang opera in local theatres. She was a devout Catholic and a member of the Third Order of St. Francis of Assisi, attended St. Joseph’s Church where she sang in the choir and St. Patrick’s Church. In addition to her husband, Trudy was predeceased by two brothers and a sister in Germany. She is survived by her sister, Adelheid Xaphes of Saco; and her four children, William E. Seidel of The Villages, FL, Lorraine M. Seidel of Limington, Gerald C. Seidel of Portland, and Maria Dahnke (Michael) of Plaistow, NH; grandchildren, Anne-Marie, Christine, Billy, Julie, Jeremy, Alax, and Leli; four great-grandchildren, Dylan, Alan, Nick, and Tony; and numerous nieces and nephews in Germany. Private services are in the care of Dolby, Blais & Segee, 35 Church Street, Westbrook. Interment will be held at Calvary Cemetery, South Portland. To express condolences and to participate in Trudy’s online tribute, please visit www.DolbyBlaisSegee.com.

The family of Edeltraud "Trudy" Seidel created this Life Tributes page to make it easy to share your memories.

PORTLAND – “Oma” passed away peacefully at her home on April...

Send flowers to the Seidel family.