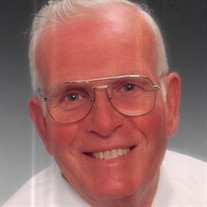 NORTH WATERBORO – Earle E. Doughty, Jr., 79, passed away on November 21, 2020. He was born on February 5, 1941 in Portland, the son of Earle E. Sr., and Marion (Cole) Doughty. He recently celebrated his 60th anniversary with his wife, Joyce (Graffam) Doughty. He will be remembered as a great father, husband, grandfather, and great-grandfather. He was a man who would talk to anyone and was a kind, caring and compassionate person who helped anyone in need. He worked for Sears for 43 years, as a warehouse manager in Portland, Scarborough, and South Portland. After retiring from Sears, he went on to work for Hannaford for 24 years. While at Hannford he was employee of the month many times and was once selected as employee of the year. While working he was fond of saying “another day in paradise” which helped to keep morale high. He was a fan of the Red Sox and would watch all of their games with his son, Michael. He even made several trips to Fenway to watch them play. In addition to his loving wife, he is survived by his children, Julie Doughty of South Portland, Michael Doughty of North Waterboro, Kathy Dudley of Portland, and Helen Huntley of North Waterboro; grandchildren, Michael, Jennifer, David, Melissa, Marissa, Rebecca, and James, Jr.; great-granddaughters, Madeline Grace, and Cora Belle; and many nieces and nephews that he was very fond of. Services will be private for the family.

The family of Earle Everett Doughty Jr. created this Life Tributes page to make it easy to share your memories.

Send flowers to the Doughty family.