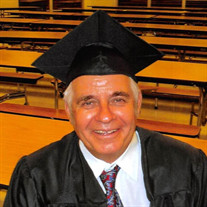 ST. CLOUD, FL – Earl “Bud” Blake Harris, Jr., 81 died unexpectedly on January 12, 2022 at his home in St. Cloud, Florida. He was born on February 4, 1940 in Waterboro, Maine the son of Earl B. Harris, Sr., and Lillian (Sluckus) Sawyer. Buddy married Janet Gilman on October 8, 1960 and together they raised a family and celebrated nearly 40 years together. A self-made business man, Buddy owned and operated Earl B. Harris & Son Trucking and was one of the first to develop and sell waste wood products- sawdust, shavings, and mulch. He was fortunate to have a friend and mentor named Dana Elliot who taught him many things. In later years he owned and operated Carter Feeds & Pet Supply next to his home on the River Road in Windham. He was also involved in real estate and could “wheel and deal” very well. He was driven and wasn’t afraid to take big risks. He obtained his GED later in life, in between traveling the world with his partner, Luce. They enjoyed dancing and were often found at the Elks, Moose, and other lodges in Florida. He had a great sense of humor and lived life to the fullest. Other interest included tending to his vegetable garden, watching the oxen pull at Fryeburg and Cumberland County Fairs, hunting, was active with Boy Scout Troop 805, and being a very devoted cat dad. In addition to his wife and parents, he was predeceased by his brother, Norman Harris; nephew, Ricky Ramsdell. He is survived by his daughter, Diane Harris of Windham; son, Brian Harris of Naples; sisters, Roberta Ramsdell and her husband, Bill of Hollis, and Phyllis Harris of Lowell, MA; brother, Tom Harris of Limerick; half-siblings, Holly, Violet, Timothy, and Alice of New Hampshire; two grandchildren, “the babies”, McKenzie and Kaitlin Harris of Raymond; and many nieces and nephews. Funeral services will be private for family and burial in the spring will be announced at a later date. In lieu of flowers, donations in Buddy’s memory may be made to Boy Scout Troop 805, 11 Kennard Rd., Windham, ME 04062 or to the Animal Refuge League of Greater Portland, 217 Landing Rd., Westbrook, ME 04092.

The family of Earl "Bud" Blake Harris Jr. created this Life Tributes page to make it easy to share your memories.

Send flowers to the Harris family.