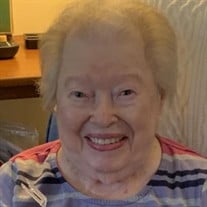 GORHAM - E. Joyce Kovalcik, 99, of Gorham passed away on September 13, 2020 at Gosnell House in Scarborough, after a short illness. Joyce was born in Hawkshaw, N.B., Canada on August 17, 1921, a daughter of the late Hector and Beulah (Elliott) Morrison of Millinocket, Maine. She grew up in Millinocket, graduated from Stearns High School in 1939, and attended Maine General Hospital School of Nursing in Portland, ME. Joyce moved to New York City in 1941 where she met and married her husband John Kovalcik. They were married 48 years until his passing in 1990. Joyce lived in New York City and then Brooklyn, NY for 38 years, working in quality control for Pfizer, Inc. She and John moved to Steep Falls, ME in 1979 and enjoyed their retirement years fishing, bird watching, gardening and spoiling their cats. For the past 11 years, Joyce has resided in Independent Living at Gorham House. There she made many friends and enjoyed participating in activities and outside excursions, her most favorite being going out to lunch, especially for lobster rolls. At Gorham House, Joyce was a member of the Scholarship Committee, interviewing scholarship candidates and taking part in running the Itsy Bitsy Store and the clothing sales that went to the Scholarship Fund. She looked out for her friends and neighbors on Lincoln at Gorham House, and lately, when they have been unable to leave their residence due to COVID, she started treating the Lincoln residents to an occasional lunch of Italians. After she began this tradition, other residents also followed suit. Joyce was a voracious reader, completed all the puzzles in the Portland Press Herald every day, and was as sharp as a tack until her final days. She was an avid Red Sox fan, nothing would deter her from the television on game day. She delighted in telling everyone that would listen that she finally made it, just before her 88th birthday, to see her beloved Red Sox play in Fenway Park. Joyce was the oldest of nine children. She is survived by her brothers, Harry Morrison and his wife, Tina of Millinocket, Franklin Morrison and his wife, Joyce of The Villages, Florida, and Gary Morrison and his wife, Billee of Bangor. In addition to her parents and husband, Joyce was predeceased by her sister, Jean DeVoe; sister and brother-in-law, Ruth and Paul Gonya; brothers and sisters-in-law, Lewis and Patricia Morrison, and Robert and Ellen Morrison; and brother, Hector Morrison. She is also survived by her very dear friends, Sandy and Jim Osterrieder and Mimsi and Dick Harter of Steep Falls; along with numerous nieces, nephews and their families. The family would like to thank the staff of Gorham House and Gosnell House for their kind and supportive care. Relatives and friends are invited to a visitation from 12 pm until the start of the funeral service, 1 pm, Sunday, September 20, 2020 at the Gorham Chapel of Dolby Blais and Segee, 76 State St., Gorham, ME. Due to current COVID-19 restrictions, all safety protocols will be observed during visitation and the service. A private graveside service will be held at the Maine Memorial Veterans Cemetery in Augusta at a later date. Contributions in her memory may be made to the Gorham House Scholarship Fund, 50 New Portland Rd., Gorham, ME 04038 or to a charity of your choice. To express condolences and to participate in Joyce’s online tribute, please visit www.DolbyBlaisSegee.com

GORHAM - E. Joyce Kovalcik, 99, of Gorham passed away on September 13, 2020 at Gosnell House in Scarborough, after a short illness. Joyce was born in Hawkshaw, N.B., Canada on August 17, 1921, a daughter of the late Hector and Beulah (Elliott)... View Obituary & Service Information

The family of E. Joyce Kovalcik created this Life Tributes page to make it easy to share your memories.

GORHAM - E. Joyce Kovalcik, 99, of Gorham passed away on September...

Send flowers to the Kovalcik family.