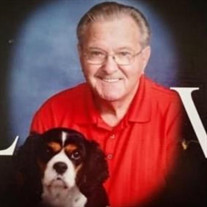 Donald G. Wescott, 74, of Lakeland, Fl, passed away on October 7, 2021 at Lakeland Regional Hospital. Donald was born in Westbrook, Maine, to Everette and Ruth Deering Wescott on October 20, 1946. He went to school at Westbrook High, where he played football and was nicknamed Wiggy! He worked as a Press Operator for S.D. Warren. Don loved baseball and coached many champion little league teams in Buxton, ME. He was a pioneer for having the first female on his little league team! He took a lot of flak for it, but always said “She’s better than most boys as a pitcher!” Donald is survived by his daughter, Cheryl Bradford, and her husband, Charles “Scott” Bradford; sons, Donald M. Wescott, Daniel G. Wescott, Kevin Chreitien and Timothy Chreitien; grandchildren, Chrystal MacDonald, Christopher Wescott, Jake MackDonald, Desiray Wescott Nelson, Ashlynn Wescott, Austin Chreitien and Channelle Chreitien; great grandchildren, Jose Jacob, Owen Armand, Declan Charles, Ezekiel Alexander; the mother of his children, Susan Sinclair Wescott, and many nieces, nephews and sister-in-laws who meant a lot to him. Donald is preceded in death by his wife, Claudette Wescott; parents, Everette Wescott and Ruth Deering Wescott; brothers, James Wescott, Richard, Raymond, Robert, Clifford and Dennis Wescott. He did not like being the last one left! Visiting hours will be held from 4:00pm to 5:00pm with a Funeral Service starting at 5:00pm on Wednesday, October 27, 2021 at Dolby, Blais & Segee Funeral Home, 35 Church st., Westbrook, Maine. Burial will follow at 11:00am on Thursday, October 28, 2021 at Woodlawn Cemetery in Westbrook. In lieu of flowers, memorials may be given to American Heart Association or the American Diabetes Association. Donald’s family wishes to extend their sincere thanks to Family and Friends and Schalamar Creek Residents.

Donald G. Wescott, 74, of Lakeland, Fl, passed away on October 7, 2021 at Lakeland Regional Hospital. Donald was born in Westbrook, Maine, to Everette and Ruth Deering Wescott on October 20, 1946. He went to school at Westbrook High, where... View Obituary & Service Information

The family of Donald G. Wescott created this Life Tributes page to make it easy to share your memories.

Send flowers to the Wescott family.