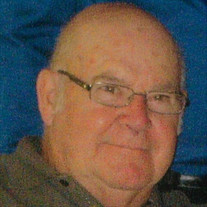 WINDHAM - Donald Albert “Don” Tanguay, 85, passed away peacefully at his home on April 9, 2022. He was born on April 2, 1937 in Westbrook, Maine. The son of Raoul and Rose Tanguay (Arsenault). Married to his “Sweetie” Charlene Virginia (Sawyer) Tanguay of 58 years. They have 3 children, Annette Whitcomb and her husband, Ronald, Lisa Robbins and her husband, Timothy, Donald Tanguay, II and his wife, Kimberly; five grandchildren, Jessica Ciez and her husband, Michal Ciez, Donald Tanguay, III and his wife, Brittany, Timothy John Robbins, Jr and his wife, Kathryn, Cory Whitcomb, and Ryan Whitcomb; three great-grandchildren, Isaiah and David Ciez. Brothers and sisters, Robert Tanguay and wife Naoko, Priscilla Moulton and husband Phillip, Florence Tanguay, Gerard Tanguay, Roland Tanguay, Germaine Phinney and husband Paul, Camil Tanguay, David Tanguay, Michael Tanguay and wife, Barbara, Sylvia (Gloria) Tanguay; and sister- in-law, Vicki Fogg. Don served in the United States Army. He worked at The Boyd Corporation for 20 years. He went on to own his own company, Don’s Appliance Sales & Service. He retired form SAD #6 after 30 years at the age of 75. Don was a hardworking man who enjoyed his family first and foremost. You could always see Don riding on his tractor taking care of his family neighborhood. He was willing to help anyone in need. He was also a Red Sox fan. His son Donnie surprised him with pavilion suite tickets to a Red Sox game, which was something he never thought would be possible. Don was the ROCK of his family. As a husband, Dad and Pepere, he demonstrated through his actions and words how to respect and love unconditionally. Donald’s Celebration of Life will be held 11:30 a.m., Saturday, April 16, 2022 at the Westbrook Chapel of Dolby, Blais & Segee, 35 Church St., where a visitation will be held 12 p.m. to 1 p.m.

The family of Donald Albert "Don" Tanguay created this Life Tributes page to make it easy to share your memories.

Send flowers to the Tanguay family.