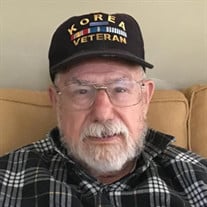 RAYMOND - Donald A. Mayer died at his home in Raymond on January 14, 2022 a few days after celebrating his 90th birthday. Born and raised in New Jersey, Mr. Mayer first became a New Englander at age 17, when his father, Joseph L. Mayer accepted a position at an oil terminal in South Portland. He served in the US Army in Korea, seeing action with the 45th Infantry Division in 1953. After graduating from Boston College in 1955, he embarked upon a 13-year position with Liberty Mutual Insurance Company, before changing careers, joining St. Vincent Hospital in Worcester, MA in its Human Resources Department. He subsequently headed that department for ten years before taking a position at Maine Medical Center in Portland. He continued in the field of Hospital Administration, working at other hospitals including Portsmouth Regional Hospital, and serving as CEO of Florida Keys Memorial Hospital in Key West, before moving in 1990 to Jupiter, FL. as CEO of The Jupiter Medical Center, a position he held until retiring in 1998. Mr. Mayer loved the outdoors, whether hiking, biking, snowshoeing, kayaking and enjoyed countless good times in those pursuits with his family. He earned a private pilot license in Florida, and also enjoyed riding his motorcycle throughout the roads of NH. He loved choral singing and was a member of the St. Joseph Church Choir in Raymond, NH for 13 years where he met many good friends. In addition to his parents Joseph and Aurelia Mayer, he was predeceased by his wife, Joanne Bisig and son, Donald Jr. Mr. Mayer is survived by his son, Gregory Mayer and his wife Rhonda of Raymond; sisters, Nancy Tolan of Derry, NH, Karen Higgins of Nashua, NH and Phyllis McInnis of Nashville, TN. He leaves three grandchildren, Rachel Mayer of Casco, Samuel Mayer of Gray, and Aaron Bisig of Valdez, AK. along with many nieces and nephews. The family thanks the staff of the VA Health Care System, In-Home Senior Services, Androscoggin Home Healthcare, and Beacon Hospice for the excellent care they provided. A military service will be held to celebrate his life at the Veteran’s Cemetery in Boscawen NH. on June 6, 2022 at 11:00a.m.

RAYMOND - Donald A. Mayer died at his home in Raymond on January 14, 2022 a few days after celebrating his 90th birthday. Born and raised in New Jersey, Mr. Mayer first became a New Englander at age 17, when his father, Joseph L. Mayer accepted... View Obituary & Service Information

The family of Donald A. Mayer created this Life Tributes page to make it easy to share your memories.

RAYMOND - Donald A. Mayer died at his home in Raymond on January...