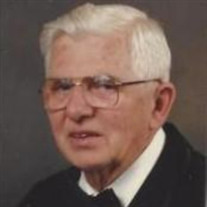 FALMOUTH - Donald R.C. Knowles, Sr. 92, passed peacefully at his home in Falmouth, Maine, Sunday, May 31, 2020 surrounded by his family. Don was born in Portland on August 10, 1927, the son of Edna Crandall and Ilko Knowles. He grew up in Falmouth graduating in the class of 1945. Donald protected his country serving in the Navy stationed, during WWII, in the Pacific Ocean theater. Upon returning from the war in 1948 he married M. Elizabeth Whitney in Falmouth. Don then went on to continue his education completing his studies and graduating from Northeastern Business College in Portland, Maine. He was tireless in his business pursuits, working in management for Maine Fisheries for 21 years before following his passion for the automobile. Over the years his passion led to becoming owner/operator of Nichols Pontiac, Augusta, Performance Motors, Falmouth, Waldoboro Ford, Waldoboro, Rackley’s Auto Sales and Gem Auto Rentals both in Windham. Throughout his automobile career he represented seven different franchises. For over ten years Don worked in Real Estate brokering in the Windham area, specializing in both land and home sales. He served on both the Portland Board of Realtors and the Maine Board of Realtors. He was a proud member of the Masonic Order which included being a 70 plus year member of Deering Lodge #183, Mt. Sinai Chapter and the Portland Commandery. He was also active in the Kora Shrine Temple where he pursued his love of the “Facts and Figures” miniature parade cars. Don was a member of the West Falmouth Baptist Church and was currently a member of Lake Region Baptist Church in Raymond. Donald is survived by his wife of 72 years, a son Donald R.C. Knowles and wife Marlene of Eustis, a daughter Deborah E. Mason of Gray, a son David A. Knowles and wife Nancy of Gardiner, five grandchildren, nine great grandchildren and one great great grandson. A private ceremony will be held at a future date to be determined. Interment will be in Blanchard Cemetery, Falmouth. In lieu of flowers donations may be made to The Shriners Hospitals for Children – Boston, Attn: Development Office, 51 Blossom Street, Boston, MA 02114.

FALMOUTH - Donald R.C. Knowles, Sr. 92, passed peacefully at his home in Falmouth, Maine, Sunday, May 31, 2020 surrounded by his family. Don was born in Portland on August 10, 1927, the son of Edna Crandall and Ilko Knowles. He grew up in Falmouth... View Obituary & Service Information

The family of Donald R.C. Knowles Sr. created this Life Tributes page to make it easy to share your memories.

Send flowers to the Knowles family.