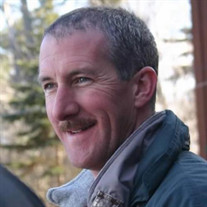 WESTBROOK—Donald Stephen Bois, 56 passed away unexpectedly. He was born on December 29, 1964, a son of Paul and Constance (Moreau) Bois. A few paragraphs don’t even begin to paint a picture of Donald’s beautiful life. Donald grew up in Westbrook and graduated from Westbrook High School in the class of 1983. Donald proudly began his career with Sappi nearly 37 years ago where he was a skilled paper maker; he knew Paper Machine #9 inside and out. Coworkers at Sappi were his second family. On August 17, 1991, he married Terri Violette and the two remained in Westbrook, raising their children, Elizabeth and Jeffrey. In Donald’s younger years he was an avid bowler and hell raiser with the Giles Street Gang. Throughout Donald’s life, countless memories have been made in the Maine woods hunting, fishing, hiking, kayaking, and camping with his family and closest friends. Every year, beginning when Donald was 5 years old, many trips were made to Abol Bridge Campground throughout the year. Some of his favorite things to do were camp in the winter and explore old roads and try to get lost driving with Elizabeth. He loved spending time with Jeffrey fishing up at Nesowadnehunk Lake, remodeling his camp, ping pong tournaments in the basement and teaching him how to be a skilled outdoorsman. Recently he enjoyed going for walks, kayaking, camping and spending warm days on the front porch with his Wife, Terri and two kitties, Irving and Ethel. Adventures with his family were the highlights of his life. Above all, Donald was a selfless man who consistently put others before himself. Whether that be helping a neighbor with a construction project or fixing a car. Donald will be remembered as a quiet, kind, gentle soul who loved his family and friends with his whole heart. He is survived by his loving wife of 29 years, Terri Bois; children, Elizabeth and Jeffrey Bois; his mother, Constance Bois; his siblings, Paul Bois and his wife Linda, Steven Bois and his wife Amy, and Karen Theriault and her husband David; along with many nieces and nephews. He was recently predeceased by his father, Paul Bois. Services for Donald are private. The family will be holding a celebration of life at a later date. In lieu of flowers, memorial contributions in Donald’s name may be made to: The Yellow Tulip Project at https://theyellowtulipproject.org/donation, or the Animal Refuge League of Greater Portland at https://arlgp.org/make-a-gift/donate/.

WESTBROOK&#8212;Donald Stephen Bois, 56 passed away unexpectedly. He was born on December 29, 1964, a son of Paul and Constance (Moreau) Bois. A few paragraphs don&#8217;t even begin to paint a picture of Donald&#8217;s beautiful life. Donald... View Obituary & Service Information

The family of Donald Stephen Bois created this Life Tributes page to make it easy to share your memories.

Send flowers to the Bois family.