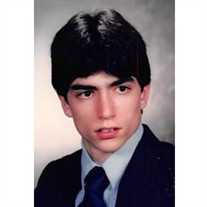 PORTLAND - Dominic Edward Pizzo, 49, passed away on June 22, 2021. Beloved son of Joseph Pizzo, Jr. and Sharon Pizzo. Dominic was born on March 31, 1972. Dominic attended USM after graduating from Deering High School in 1990. He spent many years working in the family produce business, and later worked for Shaw’s. Dominic loved to read and write, enjoyed listening to old music and watching the classic movies. Most of all he cherished his family. His daily calls to his parents were treasured moments. He always closed with I love you unconditionally. Dominic is survived by his parents, Joseph Pizzo, Jr and Sharon Pizzo of Falmouth; his eight siblings, Jody Connolly and her husband, Joseph of Wesley Chapel, Florida, Joseph Pizzo, III and his wife, Terri of Portland, Anna Abate and her husband, Tony of Boston, Mass, Sherry Pizzo-Derrig of Portland, Kathy Pizzo and her husband, Terrence Naylon of Portland, Gina Pizzo and her longtime partner, Michael Travers of Falmouth, Angela Duffy and her husband Sean of Cumberland, and Anthony Pizzo of Falmouth; as well as many nieces and nephews, aunts, uncles and cousins. He was predeceased by his grandparents, Joseph Pizzo, Sr and Annie Pizzo, and Ralph and Eleanor Roberts; as well his two beloved nieces, Ashiley Megan Connolly and Mackenzie Glo Pizzo. Relatives and friends are invited to attend a Mass of Christian Burial being held at 11 a.m., Friday, June 25, 2021 at St. Joseph Catholic Church, 673 Stevens Ave, Portland. Burial at Calvary Cemetery will immediately follow.

The family of Dominic Edward Pizzo created this Life Tributes page to make it easy to share your memories.

Send flowers to the Pizzo family.