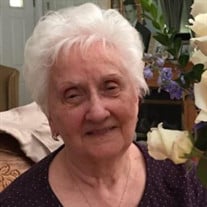 SCARBOROUGH - Dolores Marie (Dubois) Ferron, 83, passed away peacefully on December 31, 2020 with two of her children at her home in Scarborough after an extended illness. Dolores was the daughter of the late Albert and Bertha (Labreque) Dubois of Westbrook. In 1955, Dolores graduated from Westbrook High School and married her high school sweetheart, Robert (Bob) Ferron in February, 1956. They celebrated 63 years of marriage together before his passing fourteen months ago and they were reunited again on what would have been his 85th birthday. Dolores and Bob raised their three children in Westbrook beginning their lives in a small home on Nason Avenue, later building a new home on Cumberland Street. In the 1970’s they purchased a piece of land on Sand Pond in Denmark where they built their camp and would spend many wonderful years enjoying it throughout all seasons. The walls of camp were filled with hundreds of Harlequin Romance books, Dolores was a voracious reader who could often be found relaxing on the deck while reading through her collection. In 2000, after their children were grown and had families of their own, Bob and Dolores made the decision to sell their Westbrook home as well as their camp in order to build their ultimate retirement home in Scarborough where they could live in a private, quiet setting and be closer to the ocean. Early in their marriage, Dolores was employed by S.D.Warren Paper Company as a key punch operator. She held various positions at SDW and later went on to work as an office manager at a local dental office as well as a medical billing company. In the late 1980’s, Dolores was hired by UNUM where she spent several years as an administrative assistant to senior executives. Dolores and Bob were fortunate to be able to retire in their mid-fifties and continued to enjoy regular travel to the tropics, Canada and Alaska. Dolores was loved for her kind soul, sweet demeanor and bright smile. She had several life-long friends who she remained connected to throughout her life. She had an incredible sense of humor and always accepted being the center of family jokes with such grace. Dolores was a wonderful mother, grandmother and wife. In addition to her husband, Bob, Dolores was predeceased by her grandson, Evan Gallant; brother, Ronald Dubois; and sister, Gertrude Boissonneault. Surviving Dolores are her children Pamela (Shawn) Randall of Buxton, Michael Ferron of Scarborough and Pattie Gallant of Portland; as well as grandchildren, Patty (Dan) Lobbezoo of Grand Rapids, Michigan, James (Cassie) Waters of Hollis, Nicholas Bissonnette of Bath, Isaac, Alexis and Lorenzo Randall of Buxton, Ryan Ferron of Bath, Cassidy (Dylan) Brayley of Brunswick, Lily Shilale of Portland; and 7 great-grandchildren. She is also survived by her sister, Marcella Richio; and several nieces and nephews. She will be especially missed by her loyal, four-legged grand dog, Buck. In light of the COVID-19 pandemic, there will be no visiting hours or funeral ceremony. The family will hold a celebration of life at a later date. To honor her life and the memory of her grandson, Evan Gallant, please consider making a donation to Make-A-Wish Maine online at, https://wish.org/maine or by mail at Make A Wish Maine, Attn: Memory of Dolores Ferron, 66 Mussey Road, Scarborough ME 04074. To express condolences and to participate in Dolores’ online tribute, please visit www.DolbyBlaisSegee.com

SCARBOROUGH - Dolores Marie (Dubois) Ferron, 83, passed away peacefully on December 31, 2020 with two of her children at her home in Scarborough after an extended illness. Dolores was the daughter of the late Albert and Bertha (Labreque) Dubois... View Obituary & Service Information

The family of Dolores Marie Ferron created this Life Tributes page to make it easy to share your memories.

Send flowers to the Ferron family.