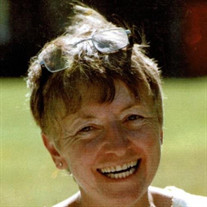 WINDHAM - Diane Barbara D’Alessandro, beloved wife of Joseph D’Alessandro and mother of Joseph, Richard, and Michael, passed away quietly on March 2, 2022, at Gosnell Memorial Hospice House in their presence after a year-long battle with cancer. She was born in Passaic, NJ on August 7, 1947, the daughter of Daisy and Walter Chapman. She married her high school sweetheart, Joseph, and settled in Clifton, NJ where they loved one another dearly and were partners in every way. Diane was a sweetheart, a mother, a grandmother, a role model of strength, compassion, honesty, intelligence, and passion for life. Their life journey took them to South Dakota, Northern California, and eventually Raymond, ME, where they’ve enjoyed the past 17 years and recently celebrated 54 years of marriage. Diane is survived by her husband, Joseph of Raymond, ME. She is also survived by her son, Joseph and his wife, Estrella of Round Rock, TX, Richard and his wife, Margaret of San Jose, CA, and Michael and his wife, Nathalie of Driftwood, TX; grandchildren, Eric, Peter, Luke, Sophia, and Isabella. She is also survived by her four siblings who live in New Jersey, Betty, Jim, Peter, and Carol, as well as several nieces and nephews and her dear family friend, Cindy Kimball of Lewiston, ME, along with her daughter, Erin. Diane will be memorialized at a small, private service.

The family of Diane Barbara D'Alessandro created this Life Tributes page to make it easy to share your memories.

Send flowers to the D'Alessandro family.