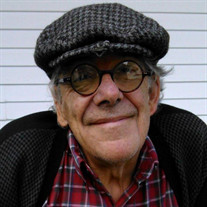 Dennis Allen McLaughlin, 1948 – 2020 PORTLAND-- Dennis A. McLaughlin, husband, father of two, beloved friend to hundreds, died September 10, 2020. A heart able to cherish so many people and interests could not stand up to the rigors of surgery. He was 72. Dennis lived his early childhood in Portland, the city of his birth. He spent his formative years and much of his adult life in Westbrook. In addition to his generous and fun-loving mother, Theresa, and his brother, Ralph, he was blessed with a large family, including grandparents, a slew of aunts, uncles, cousins, nieces and nephews. He once said, “You know, I think it’s just kind of the luck of the draw what family you’re born into. And some people aren’t so lucky, and some people are very, very fortunate, and I’m one of them.” Dennis attended Westbrook High School, where he made deep, enduring friendships that became the core of his social group throughout his life. Dennis was married to his first wife, Mary Ann Wilson, for 18 years. They raised two fine Pembroke Corgis together, Mabel Louise and Dewey Earl, who would have made the Queen proud. Dennis built a successful business repairing timepieces specializing in antique clocks. His expertise made him an invaluable member of the team that repaired the landmark Portland City Hall clock. A longstanding interest in media developed into radio and tv production positions at several stations, including MPBN and WMPG. In 1988, he joined Media Services at USM, where he remained until retiring in 2013. During his years at USM, he met Lee Ann, the woman who would become his wife. They married and had two children, Dany, 15, and Maria, 12. Dany and Maria were his pride and joy. Dennis was a nurturing and playful father. He and Lee Ann, the children, two dogs, and a cat made their home on Revere St in Portland, where Dennis created yet another family with their neighbors. He could be found on the front stoop enjoying a drink and conversation with the Revere St regulars on any nice day. Dennis spent his retirement much as he had always lived his life. He fished, canoed, enjoyed all genres of music, went to concerts, continued to hone his appreciation of fine bourbon, played bocce, watched baseball, indulged a fascination for “so bad, they’re good” science fiction movies, read everything he could get his hands on, and tried his best to be the best father imaginable. Dennis had a phenomenal memory. He was a talented raconteur and, as he characterized it, a “Slightly Flawed Gentleman.” He could engage audiences of all ages with stories of his many and varied adventures. He loved life so much and had an enormous capacity to appreciate everything and everyone. This enthusiasm for simply being was infectious and endeared him to all he encountered. A private memorial service will be held for Dennis. To watch a live stream of his service on Saturday, September 19th at 11am, please visit: https://zoom.us/j/96868059011 where you will need to enter meeting ID 968 6805 9011. Arrangements are in the care of the Westbrook Chapel of Dolby Blais & Segee, 35 Church St., Westbrook, ME 04092.

Dennis Allen McLaughlin, 1948 &#8211; 2020 PORTLAND-- Dennis A. McLaughlin, husband, father of two, beloved friend to hundreds, died September 10, 2020. A heart able to cherish so many people and interests could not stand up to the rigors... View Obituary & Service Information

The family of Dennis Allen McLaughlin created this Life Tributes page to make it easy to share your memories.

Send flowers to the McLaughlin family.