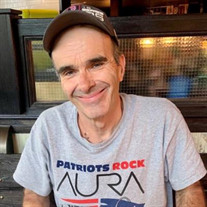 Westbrook Dennis Harold Jaques, 65, died Friday, June 25, 2021, due to complications from pancreatic cancer, at the family camp in Raymond. He was born June 6, 1956, in Portland, a son of Wyvern and Evelyn (Mayberry) Jaques. Dennis grew up in Westbrook and attended local schools. He worked for S.D. Warren for 32 years and then retired from Pit Stop Fuels after 5 years. Dennis had several passions including swimming, skiing, traveling, cheering for the Patriots and Cowboys, NASCAR, going to concerts and winning prizes on the radio. He also loved pizza and his favorite band 311. He will be remembered as an outdoorsy, nomadic man with an adventurous, and outgoing, personality. In addition to his parents Dennis was predeceased by, his sister, Linda Roper: and brother, John Jaques. He is survived by his loving girlfriend Sandy Trufant of Westbrook; daughter, Kristen Lauderdale and her wife, Sarah, of Salem, MA, and their children, Stella and Christopher; son, Derrick Jaques and his husband, Kikau Alvaro, of Richmond, and their dog Boggnes; sister, Dianne Reed and her husband, Stephen of Bennington, VT; nephews, Ernie Lovett and his son William of Westbrook, ME, Justin Reed of Philadelphia, PA, and Joshua Reed and his wife Melissa and their children Vivienne and Henry of Philadelphia, PA. Dennis’s family would like to thank the many friends and medical professionals who contributed to Dennis’ care and comfort over the past two years, including his longtime friend Maria Spofford. A memorial service will be held at 4:00PM Wednesday June 30, at the Westbrook Chapel of Dolby, Blais & Segee, 35 Church Street, Westbrook.

Westbrook Dennis Harold Jaques, 65, died Friday, June 25, 2021, due to complications from pancreatic cancer, at the family camp in Raymond. He was born June 6, 1956, in Portland, a son of Wyvern and Evelyn (Mayberry) Jaques. Dennis grew up... View Obituary & Service Information

The family of Dennis Harold Jaques created this Life Tributes page to make it easy to share your memories.

Send flowers to the Jaques family.