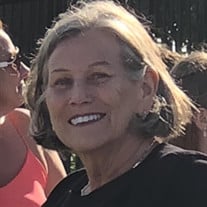 WESTBROOK - On Friday, August 14, 2020 Deborah Ann Walsh, loving wife, mother, and grandmother passed away at the age of 72 while surrounded by her family. Debbie was a lifelong resident of Westbrook, born there on December 17, 1947 to a large family of 10 lead by her parents, Lawrence and Rachel (Bettez) Knight. Alongside her four sisters and three brothers, she grew up across from the famed SD Warren Paper Mill. After attending St. Mary’s School, she graduated from Westbrook High School in 1966 and later received an Associates Degree from Westbrook Junior College. In 1965, her life forever changed as she met her future husband of 51 loving years, David Walsh, at the Palace in Old Orchard Beach. They were married on January 4, 1969 and raised three daughters; Erin, Alicia, and Courtney. A devoted Catholic, Debbie worked as a bookkeeper for several local parishes including St. Patrick’s, St. Mary’s, St. Edmund’s, St. Pious’, and St. Hyacinth’s. However, her most cherished title was that of either ‘Mom’ or ‘Nana’ as she loved her children and grandchildren dearly. Much of Debbie’s passion and pride in life was built around her family home on Spring Street. Family would congregate here for holidays, birthdays, and good company. In the summer, her 12 grandchildren would play in the pool surrounded by the beautiful gardens that she took enormous pride in. St. Patrick’s Day, Thanksgiving, and Christmas were the most notable annual celebrations, but there was always an open door and warm food to be had every day of the year. Her appreciation for holiday traditions, in particular the magic of Christmas, is something that she instilled in her entire family and will be carried on for generations to follow. Beyond holidays at home, some of Debbie’s most fond memories were traveling with her husband, David. In the last 10 years, they made unique trips to Ireland, San Francisco with their grandson Andrew, and Winter Harbor to stay overnight in a lighthouse with her sister Mary and her husband, Ken. Locally, she loved attending church every weekend, and the special Thursday trips she made to Adoration at Saint Maximllian Kolbe. Debbie will be remembered as an endearing and kind woman with a radiant smile who would always give you her time and attention. She was relentlessly devoted to her family. She is survived by her loving husband of 51 years, David Walsh; daughters, Erin Smith, Alicia Cummings (Chris) and Courtney Ottoson (Paul); siblings, Jane Ferrelli, Mary Randall (Ken), Cynthia McGarry (Owen), Rick Knight, and brother-in-law Paul Soule; grandchildren, Andrew (Jordan), Abigail and Aidan Smith, Emily, Grace and Brady Roy; Calvin, Rachel, Rita and Owen Cummings, and Riley and Sam Ottoson. She was predeceased by her siblings, Bruce Knight, Michael Knight, and Gail Soule. A visitation will be held on Thursday, August 20, 2020 from 5pm to 7pm at the Westbrook Chapel of Dolby Blais & Segee, 35 Church St., Westbrook, ME 04092. Attendees are asked to wear a mask. A private Mass of Christian Burial will be held. In lieu of flowers, memorial donations in Deborah’s name may be made to: St. Jude’s Children Research Hospital, 501 St. Jude Place, Memphis, TN 38105 OR Alzheimer’s Association, 383 US Route One #2C, Scarborough, ME 04074.

WESTBROOK - On Friday, August 14, 2020 Deborah Ann Walsh, loving wife, mother, and grandmother passed away at the age of 72 while surrounded by her family. Debbie was a lifelong resident of Westbrook, born there on December 17, 1947 to a large... View Obituary & Service Information

The family of Deborah Ann Walsh created this Life Tributes page to make it easy to share your memories.

Send flowers to the Walsh family.