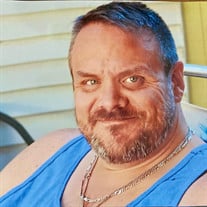 FREEPORT - Our beloved David W. Mercer went home to Jesus on February 6, 2022. David was born in Anaheim, CA in 1969, where he attended Walt Disney Elementary School. In 1977, the family moved to Yokohama, Japan due to their father’s work and lived there for a little over a year. David enjoyed this time with his family, being able to experience a new culture with them. In 1978, the family moved back to Anaheim and eventually to Maine in 1979. He attended Gorham schools, graduating from high school in 1988. David was a police cadet for the City of Portland, worked as a reserve officer for Gorham PD, and in 1994 moved to Arizona with his brother Michael where he was involved in the construction industry. He moved back to Maine in 2000 when his brother returned and started his own construction company. After finding his passion in drug and alcohol counseling, David worked extremely hard to obtain his credentials to become a counselor. He helped those who struggled with addiction and up until his death, was actively working with them. He shares two children with his former wife, Elizabeth. Lucy and Tuck were his greatest joys in life, and he loved them with the very foundation of his being. A loyal and loving son, brother, father, uncle, brother-in-law, and friend, he will be remembered for being the big guy with the big heart, his quick wit – especially the banter he exchanged with his mom and siblings, his love of the guitar, and music. His favorite bands were The Beatles, The Monkeys, and The Beachboys. David could be feisty and outspoken at times, and would do anything for anyone, despite struggling with his own demons. David enjoyed spending time with his family, playing cards, listening to music, and laughing. He had an infectious laugh that could bring a smile to your face just by hearing it. Those who knew him even just a little have lost a shining light. His radiant smile and sparkling blue eyes could light up a room. David was greeted in Heaven by his father, George; his Meme’, Rita Blanche; his Pepe’, Tony; his Gramma, Anna-Mae; and his Grampa, George. His memory lives on in the hearts of his mother, Cecile Corkum and her husband, John; his children, Lucy and Tuck; his sister, Melissa Stinson and her husband, David and their children, Drake and Harrison (Heather); his brother Michael, and sister-in-law, Connie, and Michael’s son, Conchobhar; as well as his friends, Matt, Kevin, and Chris, and all the lives he has touched. A memorial service will be held, 10 a.m., Wednesday, February, 16, 2022 at Eastpoint Christian Church, 345 Clarks Pond Parkway, South Portland, Maine. A reception will immediately follow. While flowers are welcomed and appreciated, the family asks that donations be made to The Salvation Army in memory of David, 297 Cumberland Ave, Portland, ME 04104.

FREEPORT - Our beloved David W. Mercer went home to Jesus on February 6, 2022. David was born in Anaheim, CA in 1969, where he attended Walt Disney Elementary School. In 1977, the family moved to Yokohama, Japan due to their father&#8217;s... View Obituary & Service Information

The family of David Wayne Mercer created this Life Tributes page to make it easy to share your memories.

Our beloved David W. Mercer went home to Jesus on...

Send flowers to the Mercer family.