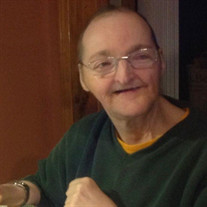 SCARBOROUGH- David B. Libby, 60, died in the early morning hours Saturday, June 20, 2020 at the Gosnell House. David was born on November 14,1959 in Westbrook, Maine. He was born to Charles and Jessie (Gallant) Libby and grew up on Libby Corner in Scarborough, Maine where Sam’s Club now sits. He was one of nine children. David attended Prides Training School in South Portland and graduated from the Woodfords School in Portland. He attended the Spurwink Adult Day Support Center and worked at Goodwill and Community Partners. He made friends easily and brought joy wherever he went. After the death of his parents in the late 1990’s he lived with his sister Delores “Laurie” Newman at her home in Scarborough before eventually finding the perfect housemate in his dear friend Roger. They were friends with a brotherly bond who enjoyed daily laughs with the Three Stooges. Without fail when leaving Laurie’s home from a big meal he’d always bring a plate “for Roger”. David loved music and would often sing and play his harmonica to the delight of anyone who’d listen. If David was around you could bet there was a new radio or cassette player close. David enjoyed seeing those he loved, making people laugh, his birthday, handing out candy in his cow costume on Halloween, holidays, visits and nightly, 7pm phone calls with his sister Laurie. Above all David loved God and his family. He always led the prayer at family dinners at Laurie’s beginning “Dear God” being sure to bless his Mom and Dad and those he’d lost. He’d often begin listing friends, his brothers, sisters, nieces, nephews, and an ever growing roll of great nieces and nephews as the food sat cooling on everyone’s plate and generations of children began giggling, but just as all thought there was no end in sight he’d wrap it up with a touching and fitting blessing and an “Amen!” David was predeceased by his mother and father, his older sister Janice Ross, his younger brother Robert Libby and three nephews Steven, James and George Anderson Junior, as well as a brother in law Gene Skillings and a nephew Gerald Lund. He is survived by his siblings, Jeanne Skillings, Eddie Libby and his wife Sharon, Ronnie Libby and his wife Linda, Delores “Laurie” (Libby) Newman and her husband Lee, Donna (Libby) Leeman and her husband Steve and Kenneth Libby and many nieces and nephews. The family would like to say a special thanks to his full-time staff including Lincoln, Yung and Christian. A graveside service will be held at on Monday, June 29th at 12:00 Noon at Black Point Cemetery in Scarborough. Arrangements are in the care of the Westbrook Chapel of Dolby Blais & Segee, 35 Church St., Westbrook, ME 04092.

SCARBOROUGH- David B. Libby, 60, died in the early morning hours Saturday, June 20, 2020 at the Gosnell House. David was born on November 14,1959 in Westbrook, Maine. He was born to Charles and Jessie (Gallant) Libby and grew up on Libby Corner... View Obituary & Service Information

The family of David Bert Libby created this Life Tributes page to make it easy to share your memories.

SCARBOROUGH- David B. Libby, 60, died in the early morning hours...

Send flowers to the Libby family.