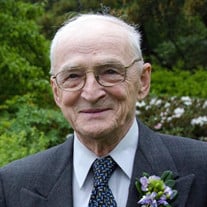 David D Bonney, 99, died July 22, 2020. He was born February 26, 1921 in Gorham, the son of Rosco and Aida May Bonney. David graduated from Gorham High School, class of 1939. He served in the Army Air Corp in India during World War II. A few years after the war he married Muriel Pauline Young on October 15, 1949. David and Muriel were married for 36 years before her passing in 1986. In 1945, after his enlistment was up he worked at installing lightning rods on barns and homes until he became a machinist at the SD Warren Paper Company in Westbrook. He took early retirement after 33 years in order to care for his ailing wife. David was a loyal member of the VFW Post 832 and the Portland Elks, American Legion Post 0197 and the Gorham Lodge of the International Order of Odd Fellows. He was an active member of the Odd Fellows from 1947 to present. Member of the Methodist Church in Gorham. David supported local and veteran charities. In addition to his wife, his daughter Janice Faye Bonney preceded him. Surviving are his sons, David Grant Bonney of Maryland, Edward Carleton Bonney and his wife Diane of Ellsworth; two grandchildren Brandon Bonney, Nicole Auth, husband Bernard and 2 great grandchildren. Son Peter Wayne Bonney and his wife Cindy of New York; four grandchildren, Jesiah Bonney, Caleb Bonney and wife Cassidy, Matthew Bonney and Shaylem Mullenax and 2 great grandchildren. His daughter Deborah Arlene Hamblen; preceded by her loving husband Henry Hamblen Jr. of Gorham. David always enjoyed telling and hearing corny jokes and stories. He enjoyed playing cards; pinochle and cribbage. He was a talented woodworker and enjoyed this hobby for years. He enjoyed taking his young family fishing, camping and on day hikes. One of his favorite activities was bowling. He also enjoyed reading, watching sports (college was his favorite) and traveling. Family was important to David. He always considered that his wealth was his family and he was a very proud father. Visitation will be held from 5:00 – 7:00PM Monday July 27, at the Windham Chapel of Dolby, Blais & Segee, 434 River Road, Windham. A private graveside service will be held at Eastern Cemetery, Gorham. Those wishing to remember David may make gifts in his name to the Gorham School Backpack Program 75 State Street, Gorham.

David D Bonney, 99, died July 22, 2020. He was born February 26, 1921 in Gorham, the son of Rosco and Aida May Bonney. David graduated from Gorham High School, class of 1939. He served in the Army Air Corp in India during World War II. A few... View Obituary & Service Information

The family of David D. Bonney created this Life Tributes page to make it easy to share your memories.

Send flowers to the Bonney family.