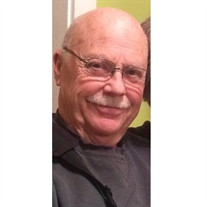 Gorham, Darby Simmons, 74, passed away on May 4, 2021 after a long and courageous battle with heart disease. Darby was born in Auburn, NY to Margaret Larkin and Ross Simmons. He attended Clinton Central Schools in NY. He was working from a young age and was always intrigued by construction and machinery. He went to work for Nester Bros. and attributed the knowledge and skills he learned there to a lifetime of use. He married at a young age and was blessed with two beautiful daughters. In 1970 he moved his family to Keene, NH. They enjoyed many happy times in NH before moving back to Clinton in 1975 to work for Herkimer Petroleum as the Project Manager of new construction. Darby also enjoyed many years as a volunteer firefighter with the Clinton Hose Co. Years later he formed his own business, Simmons Maintenance Company and met the love of his life, Pat Golembiowski. They married in 1993 and in 1998 moved to Gorham, Maine where they built a beautiful home together. Darby retired in 2001 and settled into his hobbies of woodworking, cooking, gardening, and his love of modified racing. He made many friends in and around the race track and spent many hours in the pits as well as the stands. Most of all he enjoyed celebrating holidays and parties with grandchildren, family, and friends. He is survived by his wife, Pat; his daughters Nicole Heller and Melissa Gotte; his sister Penny Mattis and his nieces, Tia Cole and Norah Ladd. He is also survived by his six grandchildren; Steven Winfield, Jenna Gotte, Joe Gotte, Cal Heller, Lainey Heller, and Bree McKenzie. Services for Darby will be held in his hometown of Clinton, NY. The family wishes to thank all the nurses and doctors at Maine Medical Center, Tufts Medical Center, and Bassett Hospital for their excellent care throughout his prolonged battle with heart disease.

Gorham, Darby Simmons, 74, passed away on May 4, 2021 after a long and courageous battle with heart disease. Darby was born in Auburn, NY to Margaret Larkin and Ross Simmons. He attended Clinton Central Schools in NY. He was working from... View Obituary & Service Information

The family of Darby Simmons created this Life Tributes page to make it easy to share your memories.

Send flowers to the Simmons family.