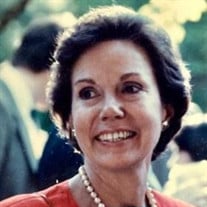 Dana Smith Poole died peacefully on Monday, December 6, 2021. She was 93 years old. Born in 1928 in New York City, she was the daughter of Elinor McLane Smith and J. Hopkins Smith of Portland, Maine. Her grandparents were Judge and Mrs. Allen McLane of Baltimore and Mr. and Mrs. James H. Smith of Portland. Dana lived in Portland and France until 1939, when WWII brought the family back to the U.S. She graduated from Waynflete School in 1946 and Connecticut College in 1950. She then moved to Montreal to become a passenger agent for Air Canada (then TransCanada Airlines) in order to use her knowledge of French. In 1954, she married Ronald Keith Jones; an Anglo-Peruvian of British parents, and moved to Lima, Peru. A year later his work took them to Boston, MA and Manilla, Philippines. During this time she learned leather-crafting in Lima, worked as a secretary at Boston University, then assisted the head of the Archeology Department in the Manila Museum where she took parts in digs of ancient burial sites south of Manila. After a divorce from Mr. Jones in 1961, Dana returned to NY and was a showroom assistant for the Danish designer Jens Risom. In 1963, she married Donald Banatyne Mahler of Eastern, PA. They moved to Hong Kong where Mr. Mahler was employed by the Chase Manhattan Bank (then CitiBank). There she hired herself out as a tour guide for visiting business people. After a transfer to Bangkok, Thailand she contracted a serious case of tropical sprue. Weak, weighing only 90 pounds and given up on by the doctors of Bangkok, Dana went to an off-the-charts healer in Bangkok who was considered either mad or genius as a last resort. He treated her with an unknown substance injected 24/7 for a week and the sprue disappeared. When she was strong enough, the Mahlers travelled back to the U.S. Doctors in the U.S. were disbelieving and curious. A blood test revealed that her system was saturated in folate. The unknown drug that had stopped the sprue in Thailand was folic acid! Back in NY, Dana returned to the furniture business. Mr. Mahler died in 1968 from an aneurism. In 1970 she married William M. Poole of Portland, ME. Subsequently she became a contributing editor for the Swiss American Review, a 100-year-old periodical published out of NY. Her column, Swiss American Portraits, reported her interviews with a variety of Swiss who made their marl abroad, from Ambassadors to race-car drivers. Dana considered her many lives as a long sea voyage, complete with ship wrecks and salvaging. Regarding her manner of adapting to each, she would say she was a “jack of all trades and master of none.” Skier and sailor, she raced as a teenager for the Adams Cup, one year winning the Women’s National Sailing Championship as crew member for her sister, Jane Smith. In later years she crewed on a 2-man Tiger Cat on Manila Bay. Past memberships include the Portland Yacht Club, the Ancon Yacht Club in Lima, the Army-Navy Club in Manila, the Foreign Correspondents Club in Hong Kong, the Royal Bangkok Sports Club and the Asia Society and China Institute in New York. Dana had many charities that included heart and lung associations, St. Jude’s Children Research Hospital and Smile Train. Most notably, she was a long-time monthly supporter or “partner” of Doctors Without Borders, the Carter Center, the Bowery Mission and the Doe Fund in NY and Mercy Ships. She volunteered time and talent to write brochures, ads and occasionally, articles; particularly for the China Institute in NY. Her closest brush with history was during the revolution in Argentina when Peron was ousted. When the Air Force bombed parts of Buenos Aires, she left her building for news. All the balconies and rooftops were crowded with people cheering on the planes. When word came, somehow, that he had left the country, an immense crowd surged into the streets and Dana was dragged along with them. Coincidently, the great war correspondent, Cornell Capa, was there. His now famous picture of that scene was made possible by his climbing a tree to avoid being swept away. She is survived by generations of nieces and nephews and a Jones stepdaughter and step granddaughter. Dana has requested no funeral or memorial service, only a joyful gathering of family and friends listening to her favorite music Abba. Details to follow, likely in the spring or summer.

Dana Smith Poole died peacefully on Monday, December 6, 2021. She was 93 years old. Born in 1928 in New York City, she was the daughter of Elinor McLane Smith and J. Hopkins Smith of Portland, Maine. Her grandparents were Judge and Mrs. Allen... View Obituary & Service Information

The family of Dana Smith Poole created this Life Tributes page to make it easy to share your memories.

Send flowers to the Poole family.