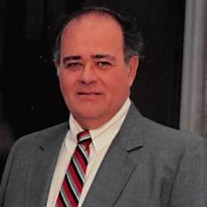 WESTBROOK-- Conrad G. Metivier passed away the morning of June 5th in Windham, Maine. He was born in Portland, Maine August 6th 1942, the son of Reina (Tardif) Metivier and Conrad G. Metivier, of Westbrook, Maine. Known as “Conny” by his family, he was a quiet, loyal man. For many years he lived near his dear Mom and made sure that she was well and had what she needed. As a young teen he graduated from Cheverus High School in Portland. Active in local, parochial and his regional community he was Treasurer of the Holy Name Society Men’s Club for 20 years at Saint Hyacinth’s Catholic Church. He was also a member of the Knights of Columbus Council 2219. An Eagle Scout himself, he mentored 20 other candidates to become Eagle Scouts. He served as Committee Member, and Scout Master. At Camp William Hinds he held many roles during his 16 years as an Adult Leader. He was also elected to the Brotherhood Order of the Arrow and presented the Vigil Award for his service in 1976. In his early years he was happiest sitting on the edge of conversations at the family camp on Sebago Lake. He had helped his Dad build the camp on the shore of the lake. He loved being surrounded by family and was quiet but with a quick wit with his cousins and other family and friends. Conny was able to communicate with the elders of the family in fluent French and as such knew much about the history of the Metivier and Tardif families. He truly enjoyed, “the cousins”. After graduation from Cheverus his interests led him into Plus Business School where he studied business and dabbled in computer work in the very early days of IBM. Conny later attended Thomas College, graduating with his BS in Business Management and a minor in Business Education. He worked at Casco Northern Key Bank in Portland, Maine at their corporate offices until his retirement. He was a valued payroll specialist, and CPA. At 29, following in his dear Dad’s footsteps, Conny was successfully elected as an Alderman in Ward 4 with the Westbrook City Council. He was a political delegate to his county, and state and a chosen delegate to the Democratic National Convention. His interests were long and varied, he worked for a period of time in NYC as a cook; as a printer’s assistant with a friend who had a printing business, and even worked at a shoe factory for a number of years. Conny was skilled in plumbing and carpentry which he learned at the elbow of his father, Conrad along with his brother, Raymond, he renovated his Mother’s apartment building and was her go to handyman in all projects. Conny was a devoted son, brother, partner and friend, and a brilliant mind. He was a true renaissance man, a person with many talents and areas of knowledge. Conny loved to travel and by far his favorite trip was to Rome with his life partner, Jeff Prescott. He is survived by his mother, Reina (Tardif) Metivier; his sister, Susan Metivier Rossignol and her husband, Norman; his brother, Paul Metivier and his wife, Joanne; and his brother, Robert Metivier and his wife Susan. He was pre-deceased by life partner, Jeff Prescott; his beloved father, Conrad; and his brother, Raymond Metivier. He leaves behind many nieces and nephews. A Mass of Christian Burial will be held on Thursday, June 11, 2020 at 11am at St. Anthony of Padua Parish, 268 Brown St., Westbrook, ME 04092. All in attendance are asked to wear a mask. Burial will follow at Walnut Hill Cemetery in North Yarmouth. In lieu of flowers, memorial contributions in Conrad’s name may be made to Camp William Hinds, 146 Plains Rd., Raymond, ME 04071. Arrangements are in the care of the Westbrook Chapel of Dolby Blais & Segee, 35 Church St., Westbrook, ME 04092.

The family of Conrad G. Metivier created this Life Tributes page to make it easy to share your memories.

WESTBROOK-- Conrad G. Metivier passed away the morning of June...

Send flowers to the Metivier family.