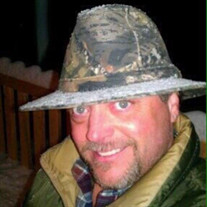 STANDISH – Clifford “Cliff” Lee Colter, 56, died suddenly and unexpectedly on Thursday July 29, 2021 in a car accident on Whites Bridge Road in Standish, Maine. He was born in Houlton on September 27, 1964 a son of Beverly and Arthurine (King) Colter. Cliff went to college in Presque Isle and moved to Portland to work for multiple engineering companies where he was able to utilize his intelligent and methodical personality traits at design firms ending with SMRT. He loved the outdoors, fishing and being out on his boat. He also enjoyed photography and hunting, where he would more often photograph animals than hunt them. Cliff was a handy man who enjoyed wood working and painting and resided at the same residence for 30 years in a home he helped to build. He was a talented cook and had a knack for inventing new dishes. He believed in giving back to his community and served as a volunteer firefighter and was a former member of the Knights of Columbus. He was loyal, loving, kind, and generous, he would pay for complete strangers who short money in the grocery store and fed all of the wild animals on his property Cliff enjoyed his classic 1967 Camaro and riding motorcycles. He liked music and would turn up the tunes and sing along especially with his daughter, Kayt. Above all else, Cliff was a family man who was fiercely protective of his loved ones and man who took his greatest joy in making people happy and laugh, especially his wife, Belle, with silly dances and faces, and his beautiful daughter Kayt. He loved spending time with his daughter Kayt, whom he adored. He will be missed terribly by his two senior cats, KC and Euphemia. Cliff will be remembered as one of a kind, a beam of white light, a supernova. Cliff was loved by Belle and Kayt more than words can express, and his entire family, we are broken hearted he is gone, and miss him with every fiber of our being. “I love you forever plus three days” He is survived by his wife, Donna “Belle” B. Colter; his daughter, Kaytlyn “Kayt” Colter; his mother, Arthurine Colter, her partner, Nate; sister, Pamela McGary, her husband, Larry; brother, Wayne Colter, his wife, Stacy; aunt, Hazel; His step-son, Adam; his former wife, Kayt’s mom, Sandra Pelletier; numerous nieces, nephews, cousins, extended family, and of course his many friends. Good Karma -Note to self- “What is my purpose in life?” I asked the void. “What if I told you that you fulfilled it when you took and extra hour to talk to that kid about his life?” said the voice. “Or when you paid for that young couple in the restaurant? Or when you saved that dog in traffic? Or when you tied your father’s shoes for him?” “Your problem is that you equate your purpose with goal-based achievement. The universe isn’t interested in your achievements… just your heart. When you choose to act out of kindness, compassion and love, you are already aligned with your true purpose. No need to look any further!” Cliff’s wishes were for a celebration of his life where everyone and anyone who loved and cared about him could get together for music, food and drinks. Time and location to be announced at a future date. In lieu of flowers, please kindly make a donation to an animal rescue or a childhood cancer organization of your choice. To express condolences and to participate in Cliff’s online tribute, please visit www.DolbyBlaisSegee.com

The family of Clifford "Cliff" Lee Colter created this Life Tributes page to make it easy to share your memories.

Send flowers to the Colter family.