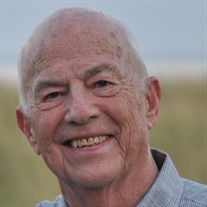 Charles (Charlie) R. Stevens 85, of Cape Elizabeth, passed away on July 7, 2020 at his home surrounded by his loving family. He was born on July 31, 1934 in Westbrook, Maine to parents Laurel and Hazel (MacDonald) Stevens. Charlie graduated from Westbrook High School in 1952 and went on to get a Bachelor’s of Arts Degree in Business from Northeastern University in Boston. Charlie married his wife Bernice (Bunny) Manderson in Portland on October 1, 1954. Charlie and Bunny had four children together. Upon graduating from college Charlie went to work for Burroughs Corporation and worked his way up from up from a junior sales representative to the New England District Manager. His work took the family all around New England and included stops in Bangor, Me., Hampden, Me., Topsfield, Ma., and eventually in 1975 to Gray, Me., when he decided to form his own company, Northern Data Systems (NDS), a successful software company and IT company based in Falmouth, Maine. He truly loved working at NDS and would always proudly say that the company was successful because of his employees and he had several of them that worked with him for over 30 years. NDS customers often became like members of the extended family and he considered many of them to be good friends. NDS had business partnerships with an extended network of other companies and because of this Charlie and Bunny traveled extensively throughout the United States, Europe, and Asia, often taking employees along with them. Charlie remained active at NDS for 45 years and was still serving as its board Chairman at the time of his passing. Charlie was a fierce competitor whether it be in sports or in business. He was an avid tennis player; he could play hours of ping pong and he always loved a good game of horse shoes. Many summer days were spent at his brother’s camp on Sebago lake. Boat rides, swimming, socializing and of course hours of horse shoes were the order of the day with his brother, sister in law, friends and extended family. In the winter his passion turned to skiing where he was a fearless “old school” skier which earned him the nickname “Two Turn Charlie”; one turn to get on the lift and one turn to get off. He was a member of the Penobscot Valley Ski Club and was on the Ski Patrol at Hermon Mountain. In the early 70s the family began to ski at Sunday River in Newry, ME so that the children could hone their ski racing skills. He and Bunny purchased a winter home in Bethel and then a home in Newry overlooking the mountain which allowed the family to enjoy active winters on the hill and off. Ski days always began with his famous blueberry pancakes (often times his other favorite food, donuts!) and when the ski day was done Charlie loved to apres ski with his family and friends which always included large batches of fresh popcorn that he would prepare. He made countless friends on the lifts and trails while skiing. Charlie was a bright light with an infectious laugh, a fantastic sense of humor and an even bigger smile. When asked how he was doing, Charlie would always reply with an emphatic “terrific”. He was a gifted conversationalist and was always well read and informed on current events and issues. He was also a master story teller and could tell jokes as well as hold an audience with the best of them. People loved to visit with Charlie and he always made those he spoke with feel better about themselves. Charlie was definitely busy between working and raising his family with Bunny, but he also was an incredibly giving person and found time to give back to the community. In his younger years Charlie was an active member of the Hampden Jaycees and he also coached his sons Little League teams. In the early 1980s he was a founding member of Maine Adaptive Sports and Recreation (aka Maine Handicapped Skiing) and he also served on its Board of Directors and as its President. He also served on the board of directors for the Maine Cancer Foundation and was a board member for Konbit Sante. In addition, he generously donated both money and time to a multitude of other charities within Maine and nationally. Surviving Charlie is his beloved wife of 65 years, Bernice (Bunny) Stevens; their children, Bruce Stevens of Vero Beach, Fl., and his wife, Ruth; Anne Stevens Reis of Falmouth, her husband Joe, and their children Jacquelyn (Eric) Wilkinson, Hilary Reis, and Taylor Reis; Mark Stevens of Cumberland Foreside, his wife Kristin Mathieson, and Mark’s daughter Delaney Stevens; Paul Stevens of Gray, his wife Julie, and their son Pierce, and Paul’s sons Duncan (Nicole) Hardy and Kyle (Jenny) Hardy. Charlie is also survived by his siblings; Richard Doughty and Madeline McLucas; his cousin Herbert Myron MacDonald, and many nieces, nephews, and great grandchildren. He was predeceased by his brother-in-laws; Ernest Manderson and Gordon McLucas who provided him with legal counsel, business advice and moral support. A celebration of life is being planned and will be announced at a later date. In lieu of flowers, please consider donations in Charlie’s name to Maine Adaptive Sports and Recreation (www.maineadaptive.org) or Konbit Sante (www.konbitsante.org). The family wishes to thank Hospice of Southern Maine for their guidance and care that they provided for Charlie which allowed him to stay home with his family. They also wish to thank New England Cancer Specialists for the care that they provided to Charlie over the past 14 years.

Charles (Charlie) R. Stevens 85, of Cape Elizabeth, passed away on July 7, 2020 at his home surrounded by his loving family. He was born on July 31, 1934 in Westbrook, Maine to parents Laurel and Hazel (MacDonald) Stevens. Charlie graduated... View Obituary & Service Information

The family of Charles R. Stevens created this Life Tributes page to make it easy to share your memories.