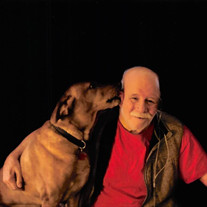 Charles J. Spinney, 72, of Gray, passed away on January 28, 2022 at his home surrounded by family. He was born in Portland on February 4, 1949, son of the late Frank and Christine (Scullin) Spinney. Charley held many titles throughout his life. He first was a Private in the United States Army Reserves from 1968 to 1974, then went on to be a volunteer firefighter for the town of Windham. He became a diesel mechanic, going to trade school and earning his certificate, then working on cars and trucks for about 40 years. He loved Nascar, antique cars, motorcycles, and even at one point owned a Model T Ford. He was also very proud of his Lionel train collection- which served as great memories for his kids who will forever remember “the train room”. Charley loved meeting up with “The Gang”, his buddies from school, for get-togethers. He was also a proud member of the American Legion Post 0086 in Gray. Charley leaves behind his beloved wife of 34 years, Barbara (Tapley) Spinney, his daughters Jennifer Shirley (Keith) of Windham and Kelley Spinney (Walter Connolly) of Manchester, NH, grandchildren; Damon Spinney (Chelsi), Hannah Wisecup (Jacob), Coleman Shirley, Ivy Shannon (Nathan), Austin Shirley, and Steven Shirley, great-grandchildren; Carsyn Spinney, Declan Shannon, and Maeve Spinney, sisters in law; Theresa Tapley (John Cox), and Karan Hanzl (Matt), brothers- in- law Bill Tapley (Lisa), John Tapley and Tad Slavin, several nieces, nephews, 3 great nieces, 1 great nephew, and last but certainly not least, his faithful, furry, four-legged companion; beloved dog Hanson. In lieu of flowers, the family asks that donations be made in Charley’s name to the Androscoggin Animal Refuge League, where he and Hanson found each other. Visiting hours will be held on Monday, February 7, 2022, from 4-6PM at Dolby, Blais & Segee, 434 River Rd, Windham, ME. To leave an online condolence, please visit www.dolbyblaissegee.com.

Charles J. Spinney, 72, of Gray, passed away on January 28, 2022 at his home surrounded by family. He was born in Portland on February 4, 1949, son of the late Frank and Christine (Scullin) Spinney. Charley held many titles throughout his life.... View Obituary & Service Information

The family of Charles J Spinney created this Life Tributes page to make it easy to share your memories.

Send flowers to the Spinney family.