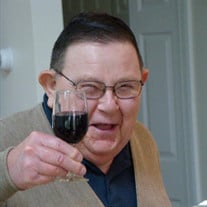 GORHAM - Charles Phillips Mosher passed away at Gorham House on September 23, 2020 after a brief illness. Charlie was born December 30, 1933 in Boston to the late Mildred Phillips Mosher and Wallace V. Mosher. He completed his BS in chemical engineering and a fifth year in Pulp and Paper at the University of Maine where he met Jane Stansfield on a blind date. They married in Wilton on October 18, 1958. Their five children were born in Millinocket, where he was manager of product development for Great Northern Paper. In 1974, he was transferred to corporate headquarters in Stamford, CT where he served as the Assistant Director of Marketing. Nine years later Great Northern moved its headquarters to Portland, ME, and Charlie and Jane found their treasured hometown of Gorham, where they eventually retired in 1995. Charlie was active in the Congregational Church until he could no longer attend and was a lifelong Mason. He enjoyed playing the piano, swimming, woodworking, model railroading, vegetable gardening, backyard barbequing, and playfully embarrassing his two youngest daughters in public. He was immensely proud of his children and grandchildren, was fond of single malt scotch and martinis, and loved Jane (and Jane’s cooking). Charlie is survived by his wife, Jane of nearly 62 years; his children, John Mosher and wife, Liz of Bath, Leigh Ivers and her husband, John of Auburn, Chad Mosher and his husband, Walter of South Dennis, Mass, Faye Connolly and her husband, Patrick of Windham, and Leslie Thibault and her husband, Tom of Saco; as well as eight grandchildren; two great grandchildren; and several grand dogs. He will be dearly missed.

GORHAM - Charles Phillips Mosher passed away at Gorham House on September 23, 2020 after a brief illness. Charlie was born December 30, 1933 in Boston to the late Mildred Phillips Mosher and Wallace V. Mosher. He completed his BS in chemical... View Obituary & Service Information

The family of Charles Phillips Mosher created this Life Tributes page to make it easy to share your memories.

Send flowers to the Mosher family.