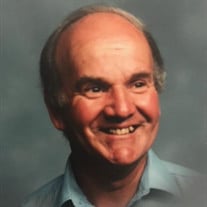 WINDHAM - Charles Robert Melanson, 89, passed away peacefully at home on January 14, 2021 with family by his side. Charlie was born in Wakefield, MA on May 28, 1931 to John and Margret (Fredette) Melanson. Charlie was one of ten children, his childhood was spent in foster care until he enlisted in the U.S. Navy at age 17. Charlie served on the USS Coral Sea, the largest aircraft carrier in the fleet, during the Koran War. After leaving the Navy in 1952 he moved to Maine where he met the love of his life, Anna Dale. Charlie worked at several different jobs prior to starting a general contracting business, Melanson and Son, in the early 70’s where he worked along-side his eldest son. Charlie retired in the late 1980’s to start M&S Discount. In addition to his loving wife of 66 ½ years; Charlie is survived by his sons, Steven (Theresa) of Windham, Michael (Betty) of Windham; daughter Jo-Dene (Gregg Alexander) of Westbrook; grandchildren, Nicholas Alexander (Brittney) of Westbrook, Timothy (Casey) Melanson of Windham, Amy Melanson of Windham, Kathy (John Woods) of Windham, Kelly Barden of South Portland; one special great-grandchild, Matthew Melanson of Windham; and sister, Mary Dodge of Montague, MA. For those of you who knew Charlie you will remember his stories, his willingness to help everyone, his love for the Navy and his passions for buying and selling treasures. If Charlie knew your name, he would call you his friend. Funeral services will be private for the family. Relatives and friends are invited to visitation hours 5 to 7 p.m., Tuesday, January 19, 2021 at the Westbrook Chapel of Dolby, Blais & Segee, 35 Church Street, Westbrook. Burial at Woodlawn Cemetery in Westbrook will be announced later in the spring. The family asks that in lieu of flowers that you donate, in his name, to your favorite charity. To express condolences and to participate in Charlie’s online tribute, please visit www.DolbyBlaisSegee.com

WINDHAM - Charles Robert Melanson, 89, passed away peacefully at home on January 14, 2021 with family by his side. Charlie was born in Wakefield, MA on May 28, 1931 to John and Margret (Fredette) Melanson. Charlie was one of ten children,... View Obituary & Service Information

The family of Charles Robert Melanson created this Life Tributes page to make it easy to share your memories.

Send flowers to the Melanson family.