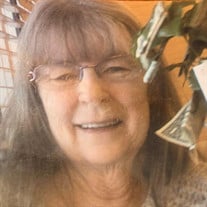 Carolyn Louise Austin, 72, passed away February 05, 2021, peacefully, at home in Standish, ME, following a long term illness. She was surrounded by her devoted family in her final hours and moments. She was predeceased by her husband, Charles Austin, and her parents Matthew C. and Honoria M. Sproul. She is survived by her partner, Harold ‘Hal’ Ware, her daughter, Deanna, husband Dwayne Durgin, son, Charles Austin, Jr., and son, Jared and his fiancé Ashley, sister, Janice, husband Wayne McDermott, and brother, James, wife Ruth; 8 grandchildren, Meghan, Nicholas, Ann Marie, Mary Kate, Keira, Dylan, Brantley, and Eloise Grace, two great grandchildren, Ashlyn and Caleb, and a granddaughter, ‘Charlie’ soon to be born, along with several nieces and nephews. Carol was born in Portland, ME, but grew up in Westbrook, graduating from Westbrook High School in the class of 1967, having had several brain tumor surgeries in the Spring of 1966 and 1967. She soon married Charles Austin, then moved to Standish. Carol was a devoted homemaker, enjoying time with her family on camping trips. Throughout her life among her special interests included table games, such as cribbage, scrabble, and jigsaw puzzles, watching the Red Sox, and in later years and attending the local Sea Dogs, Red Sox farm team at Hadlock field. Later, after her husband was deceased, and children left the home, she resided in Windham, later meeting her partner Hal, when they first met playing Bingo at the Windham Veterans’ Center. For the last 6 years, they both frequented the Center, being very avid players, and having many friends. They also went flying together in Hal’s plane, both going to many places together, bonding their unique united love for each other. They frequented her favorite coffee shop, Dunkin Donuts; She also enjoyed a Lobster Roll every now and then; A favorite pastime was doing the daily crossword puzzles together with great enthusiasm. Carol would continue with the Jumbo word game, and ventured with the Cryptoquip. She also enjoyed her Friday night card games with her “trailer park friends”, all three which she was ‘good’ at, with lots of fun, laugher, and just plain good ‘ole’ fun. Several highlights in travels for Carol was travelling out of state with her sister, attending her brother’s wedding, and retirement from The Salvation Army, and numerous family reunions. Throughout her life, she will be remembered for her devoted love and care, generous help, and appreciation for everyone in her family. Around her house you also will find many numerous memorabilia of cats. Over all her years of living, she has earned the friendship of many, many people, wherever she lived. There will be a special Celebration of Life and Fellowship for Carol in the coming months, with continued close watch of the COVID-19 guidelines.

Carolyn Louise Austin, 72, passed away February 05, 2021, peacefully, at home in Standish, ME, following a long term illness. She was surrounded by her devoted family in her final hours and moments. She was predeceased by her husband, Charles... View Obituary & Service Information

The family of Carolyn Louise Austin created this Life Tributes page to make it easy to share your memories.

Send flowers to the Austin family.