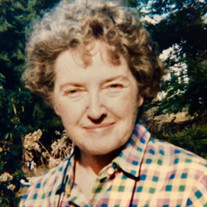 GRAY—Caroline Laura Vozella, 94, a true daughter of Maine, passed away April 19, 2021 in the care of her loving family. She was born May 12, 1926, the first child of Charles and Hazel (Rand) Wescott. Caroline grew up in Standish, was educated in a one room schoolhouse, and derived great enjoyment from riding Peggy the pony and enthusiastically practicing the piano (often while her annoyed sisters washed the dishes or performed other chores). After graduating from Standish High School, she earned a Bachelor’s degree from Gorham State Teachers College and later earned post-graduate certificates in special education. On November 29, 1952 she married John J. Vozella and the two began a family while living in Maine before moving to Reading, Massachusetts where Caroline worked as both an elementary and special education teacher. Caroline derived great enjoyment lakeside at Little Sebago Lake where her legendary cribbage and croquet skills rendered her opponents powerless; she was a mostly gracious victor. Caroline was a passionate cook and baker, deriving inspiration from Julia Child and “The Galloping Gourmet”. She was such a good baker that people even liked her Christmas fruitcakes. Her many interests included: tending her “English Garden” (a haphazard arrangement of plants to the uninitiated observer), enthusiastically playing (but never quite mastering) Scott Joplin piano tunes, persuading reluctant people to accompany her to theatrical performances (her power of persuasion would have made her a successful hostage negotiator), and viewing Father Brown mysteries (she was renowned for solving the crime before the on-screen detective could reveal the culprit). She was a friend to dogs the world over, and to wild birds that flocked to her suet and seed filled birdfeeders during long Maine winters. Caroline particularly enjoyed traveling with friends and family throughout the years, and made many memories visiting sites in Egypt, China, Italy, Mexico, and a variety of U.S. national parks. Her greatest joy came from spending time with her grandchildren, and she was both proud and supportive of their interests in ballet, nursing, ski instructing and fire breathing (although the last activity concerned her slightly). Caroline will be remembered as an exceptionally generous and loving person. She was a friend to all and a role model to many. Her courage, grace, and optimistic ability to engage life and health challenges, especially in her waning years, was inspiring to all who knew her. She was predeceased by her husband, John J. Vozella Sr., as well her siblings, Hamlin Wescott, Mary Jean (Wescott) Richards, and Priscilla (Wescott) Tash. She is survived by her three sons, John J. Vozella Jr. and his wife Christine, Stephen J. Vozella and his partner Hilary Morgan, and Joseph C. Vozella and his wife, Delphina; grandchildren, Chris Vozella, Tom Vozella, Julia Vozella and Joe Vozella; a sister, Madeline Wescott; as well as many nieces and nephews. A Mass of Christian Burial will be held 11:00am on Thursday, July 1, 2021 at Our Lady of Perpetual Help Church, 919 Roosevelt Trail, Windham. Interment will follow at 3:00pm at the Central Cemetery, Central Road, Rye, New Hampshire. In lieu of flowers, memorial donations in Caroline’s name may be made to Catholic Charities, Development Office, PO Box 10660, Portland, ME 04104 or Hospice of Southern Maine at 390 US Route One, Scarborough, ME 04074.

GRAY&#8212;Caroline Laura Vozella, 94, a true daughter of Maine, passed away April 19, 2021 in the care of her loving family. She was born May 12, 1926, the first child of Charles and Hazel (Rand) Wescott. Caroline grew up in Standish, was educated... View Obituary & Service Information

The family of Caroline L. Vozella created this Life Tributes page to make it easy to share your memories.

Send flowers to the Vozella family.