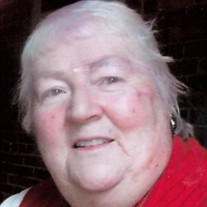 Carol J. Reynolds, 83, of Greene, ME died October 6, 2021 under Hospice care at Clover Health Care, Auburn, ME after a short period of declining health. Carol was born September 22, 1938 to Paul Dwinal and Myrtle Turner Dwinal Austin. Formerly of Westbrook, Carol relocated to the Meadows Living Center in Greene, ME after the death of her husband Stanley R. Reynolds in 2015. At the Meadows, Carol lived a happy, full, independent life while under the watchful eye of her sister, Linda Barschdorf. After graduating in 1956 from Brunswick High School, Carol served in the US Army, stationed at Fort Knox, KKY. After a 12-year marriage to Clerence Burdin, Carol married again to her soulmate, Stanley R. Reynolds of Windham. Carol was very active in the American Legion Auxiliary for many years and her hobbies were anything to do with handicrafts. She especially enjoyed baking and her monthly luncheons with the ‘Girls of ‘56’ in the Brunswick area. Carol is predeceased by husband; Stanley R. Reynolds; parents, Paul Dwinal, Sr. and Myrtle Austin, and brother, Robert Dwinal. She is survived by daughters; Valerie Ritz, of Alaska, and Janice L. Burdin, o0f Lewiston; brothers, Dwight (Jackie) Dwinal, of Bath, Philip (Sharon) Dwinal, of Freeport, Paul (Ann), Dwinal, Jr. of Lewiston, Albert (Cindy) Austin and Rayond (Darlene) Austin of Lisbon Falls; Gilbert Austin of Lisbon; sister, Linda Austin Barschdorf (Kenneth Lord), of Lisbon Falls; three grandsons, Ben Ritz, of AZ, Adam Burdin and Theodore Bisson, of Lewiston, and four great grandchildren. In accordance with Carol’s wishes, there will be no service.

The family of Carol J Reynolds created this Life Tributes page to make it easy to share your memories.

Send flowers to the Reynolds family.