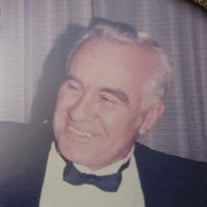 Carl Frederick Henrikson passed away on Saturday, March 12, 2022 peacefully at his home in Standish, surrounded by his loved ones. He was born in Rockland, Maine on November 30, 1931, the son of Evelyn M. and Joseph H. E. Henrikson. He moved to Bath as a young child and graduated from Morse High School class of 1950. Carl served in the Navy, in the Korean War from 1950 – 54. He was very proud of the fact, that he serviced Alan Shepard’s plane aboard ship. Upon arriving home, he met the love of his life Martha F. Holmes, whom he did not let get away. They married after knowing each other for only four months. Last September they celebrated their 67th Anniversary. They raised six children in Cape Elizabeth. Carl entered the plumbing/ pipe fitters apprenticeship program in Portland in 1954 and was licensed in three years. He went on to earn his Masters Plumbing license and to teach at SMVTI in the apprenticeship program in the evenings. He was the liaison for union 217 (which is now 716) between the State of Maine and the Union. After Carl retired, he continued to use his plumbing skills to help his community. He was very proud that fourteen of his family members entered the trade under his guidance. Carl was a member of St. Ann’s Episcopal Church of Windham where he served on the vestry as junior warden. He was the first commander of the American Legion Post 128 in Standish and was a member of the VFW post 6859 in Portland. Carl is survived by his wife Martha, two sons and four daughters: Carl J Henrikson of Scarborough, Vicki Henrikson of Auburn, Ruth Stanton and her husband Scott of Standish, Karen Murphy and her husband John of Portland, Cynthia Grant and her husband Kevin of Naples and David E. Henrikson and his wife Carrie of Westbrook. Fifteen grandchildren, Marcia Griffin, Nina Crist, Carl (Joe) Henrikson Jr., Amber Hamilton, Brianna Tomasello, Eric Myers, Elizabeth Stanton, Ryan Stanton, Cameron Murphy, Lars Murphy, Casey Grant, Colin Grant, Caitlin Grant, David (D.J.) Henrikson Jr., Sean Henrikson and seventeen great grandchildren, one great –great granddaughter and many nieces and nephews. His sister Sylvia Ames and her husband Harold of Arrowsic. Brother in law Douglas Daggett of Brookton, sister-in-law C. Leah Holmes and her husband David Lyon of Lisbon Falls and brother-in-law Richard (Dick) Redlon of Bath. Carl was pre deceased by his parents, his brother Henry Henrikson and wife Beverly, Sisters V. Astrid Daggett, E. Joanne Pottle and husband David, L. Marie Snowdon and husband Frederick, sister-in-law Marion Redlon. Granddaughter Amanda Hamilton and grandson Karl Justin Hamilton. A Funeral Service will be held on Saturday, April 30, 2022 at 11:00am at St Ann’s Episcopal Church, 40 Windham Center Road, Windham.

Carl Frederick Henrikson passed away on Saturday, March 12, 2022 peacefully at his home in Standish, surrounded by his loved ones. He was born in Rockland, Maine on November 30, 1931, the son of Evelyn M. and Joseph H. E. Henrikson. He moved... View Obituary & Service Information

The family of Carl Frederick Henrikson created this Life Tributes page to make it easy to share your memories.

Send flowers to the Henrikson family.