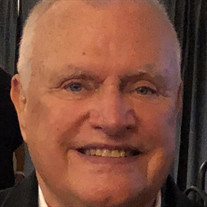 GORHAM – Bruce David Bowers, 77, passed away after a brief battle with bone cancer on January 27, 2021. He was born on February 2, 1943 in Augusta and later graduated from Gorham High School, class of 1961. He went on to graduate from the University of Maine at Portland-Gorham (USM). A retired Social Studies teacher and basketball coach, Bruce’s career took him from Rockland Jr. High to Windham Jr. High in 1977, and finally to Windham High School where he retired in 2006. Bruce was both a passionate teacher and coach at various levels from jr. high to high school varsity basketball, as well as serving as the assistant coach at Westbrook College. In addition to connecting with his many coaching friends over the years, Bruce loved to watch the development of his players, and he took great pride in their accomplishments. He continued to work with young players long after retiring, proudly earning the title, “shot doctor”. Bruce joined the Firecracker basketball organization and loved being a part of the lives of these players and families. Bruce also held a special place in his heart for Camp Tohkomeupog, where he attended camp as a boy and then worked as a counselor, and eventually as a director. He established many lifelong friends there, including his lifelong best friend, Wayne Masters. Bruce leaves behind his lifelong friend and first wife, Carolyn MacKenzie Bowers; and their children, Jeff Bowers and wife, Luci; and grandchildren, Carter and MacKenzie; son, Dan Bowers and his wife, Lisa; and grandchildren, Emily and Ian; and daughter, Kim; and grandson, Manny Byron Carlisle, who lovingly called him Bumpah. Bruce was predeceased by his father, Carroll Kelley; and brother, Byron Kelley; his mother, Faith Farnham Kelley Bowers; and his adoptive father, Warren Bowers. The family would like to thank the caregivers at Seaside Healthcare, as well as the Compassus caregivers for their attention and care during his last months. In lieu of flowers, donations may be made to the Camp Tohkomeupog Alumni Association to fund scholarships for campers, E. Milton Hoyt Scholarship Fund, C/O Steven Harding, 1251 Eaton RD., Madison, NH 03849. Due to Covid restrictions, services will be held at a later date.

GORHAM &#8211; Bruce David Bowers, 77, passed away after a brief battle with bone cancer on January 27, 2021. He was born on February 2, 1943 in Augusta and later graduated from Gorham High School, class of 1961. He went on to graduate from... View Obituary & Service Information

The family of Bruce David Bowers created this Life Tributes page to make it easy to share your memories.

GORHAM – Bruce David Bowers, 77, passed away after a brief battle...

Send flowers to the Bowers family.