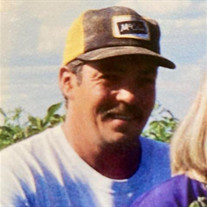 Brian J. Lavertu, 58, of Windham passed away on November 6, 2020. He was born on June 26, 1962 to parents Gerald and Laurette (Carrier) Lavertu in Madawaska, Maine. Brian grew up in Madawaska, Maine on his family’s potato farm. He could be found in the fields helping his father and grandfather as early as 4 years old. Shortly after graduating high school Brian met his beloved wife Vickie Levesque. The two were married in 1985 in St. Agatha and went on to raise two sons together. Brian was a very hard worker his whole life, continuing the family legacy as a third generation potato farmer. In 2001 his outstanding farming practices and leadership in the industry were rewarded when he won the Maine Potato Board’s Young Farmer of the Year award. Brian was very well loved by all who knew him. His family was very important to him, and he would call his dad every Sunday to catch up. In 2013 Brian and Vickie moved to Southern Maine to be with their children while they attended college. They ended up staying after the birth of their grandchildren, who brought them so much joy. Brian is survived by his wife of 35 years, Vickie; their sons Mathew, and his fiancée, Cassandra Sprague, and Benjamin; grandchildren, Munroe and Micah Lavertu; father, Gerald Lavertu; brother, Gary, and his partner Matthew “Marty” Taylor; sister, Ann Lavertu; brother in laws, William Levesque and Alban Levesque; sister in laws, Brenda Levesque, and Kim and her husband, Bob, Morin; mother in law, Verna Levesque; god children, Samantha Beaulieu, Mandie Morin, and Austin Wilson. Though there are too many to name, Brian forever cherished the time he spent with his many cousins. He also leaves behind his nieces and nephews, he was so proud of each and every one of them. He is predeceased by his mother, Laurette Lavertu and his niece, Gabrielle Levesque. There will be no calling hours, and a burial will take place in the Springtime. In lieu of flowers, please consider a donation in Brian’s name to the American Organ Transplant Association; Administrative Service Center, A.O.T.A, P.O. Box 418, Stilwell, KS 66085. www.AOTAOnline.org

Brian J. Lavertu, 58, of Windham passed away on November 6, 2020. He was born on June 26, 1962 to parents Gerald and Laurette (Carrier) Lavertu in Madawaska, Maine. Brian grew up in Madawaska, Maine on his family&#8217;s potato farm. He could... View Obituary & Service Information

The family of Brian J. Lavertu created this Life Tributes page to make it easy to share your memories.

Send flowers to the Lavertu family.