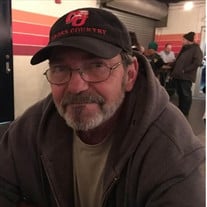 Westbrook Brian Keith Cameron (known as Keith), 63, passed away unexpectedly on June 27th surrounded by family. Keith was born on August 9th, 1958, in Tulsa, Oklahoma to beloved mother Louise Cameron. A southern boy at heart, Keith spent much of his early years in the South. After moving to Maine in 1998, he eventually discovered the true Mainer in him. Keith was a musician at heart, spending much of his earlier career as a traveling musician, playing drums and singing. He spent fifteen years traveling the country preforming before meeting his future wife, Pamela Cain, in 1996. Additionally, Keith grew a career in maintenance, and was known as a “go to” person for any type of repair you needed. He loved to fix things, garden, and bird watch; his favorite bird was the woodpecker, who he would greet every morning by saying “Hello Woody” when he arrived. Keith also loved animals and took in many strays that his kids brought home over the years. He was the only person in the house that their cat, Luna, could tolerate. Keith loved to fish, and taught not only his own children, but many other kids in the family. He was just as excited as they were when they caught the “big one”. His one true love in his life was his family, for whom he would do anything and everything. Keith was a loving and supporting father, husband, brother, and son, and is survived by his wife Pamela Cameron, and two children Doran and Sierra Cameron. Additionally, he is survived by his mother Louise Cameron, brother Gary Kim Cameron, and sister, Pam Nelson. Keith was also a beloved uncle and father figure to his nieces and many of his children’s friends throughout the years. Keith did not want a funeral, but instead the family will be holding a celebration of his life at their home on Monday, July 5th from 5:30pm-7:00pm. All who knew and loved Keith are welcomed to attend and may reach out to the family for additional details. To express condolences or to participate in Brian’s online tribute please visit www.DolbyBlaisSegee.com

The family of Brian Keith Cameron created this Life Tributes page to make it easy to share your memories.

Send flowers to the Cameron family.