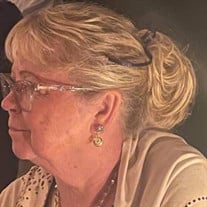 Beverly Starr Blake (Bev),77, died unexpectedly on September 13, 2021 at her home in Windham. She was born on March 26, 1944 in Portland, Maine, the daughter of the late Hartley Wallace Simmons and Alice Starr Kennedy. She graduated from Cape Elizabeth High School in 1962. In 1963 she married John Blake, her high school sweetheart. Bev and John met at the age of 12 and started going steady at 13. She worked at Crosby Laughlin and HP Hood, before she left work and became a devoted homemaker. John worked for Northeast Airlines at the time and for the first 13 years of their marriage, they enjoyed traveling the world together. Their favorite place to visit was Bermuda. In 1976, Bev started raising children and vacation spots became Disney World and Arizona. Later in life, John and Bev sold their house on Panther Pond and traveled the country in their motorhome. They spent their winters in Casa Grande, Arizona where they met lifelong friends. With these friends, they enjoyed prospecting the old gold mines in Arizona and New Mexico. Bev and John finally settled down in Windham in 2008. Bev enjoyed all kinds of crafts including sewing and Swedish weaving. She was an amazing cook and had a contagious laugh, laughing usually until she cried. Her favorite hobby was shopping and she loved all the shopping channels. One of Bev’s biggest joys was her twin granddaughters, who were born on her 70th birthday. She was also a member of the Mayflower Society, tracing her roots back to the Elder William Brewster. Besides her parents, she was predeceased by a brother who passed shortly after birth. She is survived by her husband John of 57 years. She is also survived by her daughter Julie, who is a personal trainer and stay at home mom, and her husband Michael, her son Wesley Blake, who is a captain for Federal Express on the 757 airplane and his wife Inga; her brother, Hartley Simmons of Cape Elizabeth; and her twin granddaughters, Alison Starr and Alexa Marie, along with 3 grand dogs. An open house will be held at her daughter’s home in Raymond, Maine on Sunday September 19 from 12-4. She will be buried at Riverside Cemetery on Plains Road in Raymond. Those who wish, may make donations in Bev’s name to St. Judes Children Hospital, 262 Danny Thomas Place, Memphis, TN 38105.

Beverly Starr Blake (Bev),77, died unexpectedly on September 13, 2021 at her home in Windham. She was born on March 26, 1944 in Portland, Maine, the daughter of the late Hartley Wallace Simmons and Alice Starr Kennedy. She graduated from... View Obituary & Service Information

The family of Beverly Starr Blake created this Life Tributes page to make it easy to share your memories.

Send flowers to the Blake family.