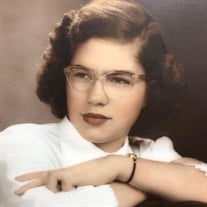 WINDHAM—Betty Morey Powell, 88, passed away surrounded by her family on June 19, 2020 at Ledgewood Manor. She was born December 2, 1931, a daughter of Stuart E. and Esther (Haley) Stanley. Betty was an honor graduate of Fryeburg Academy in the class of 1949. She went on to attend nursing school and got married to Robert C. Morey; the two were married for 41 years until his passing in 1993. Betty worked as a nurse at Devonshire Manor and later as a billing clerk for Mercy Hospital. She was a devoted wife and mother; being surrounded by her family was her greatest joy. She could often be seen on the sidelines at her grandchildren’s sporting events. Betty enjoyed going out to eat and over the years traveled on many cruises which she loved to get all dolled up for. She is survived by her children, Stuart J. Morey and his wife Mabel Jean, Roberta Hall and her companion Carl Hinkson, and Rhonda Rolfe and her husband Wendell; grandchildren, Heidi Litchfield and her husband Jeremy, Darik Rolfe and his wife Betsy, Stacey Tolliver and her husband Greg, Lori Melanson and her husband Joseph, Shaun Morey and his girlfriend Sabrina, Kellie Montero and her husband Victor, and Ron Darby and wife Vivian ; 15 great grandchildren, and one great great granddaughter, Aaliyah Lynne Morey. She was predeceased by both of her husbands, Robert C. Morey and Claude S. Powell, as well as a great grandson, Jacob. A graveside service is being held on Thursday, June 25, at 11am at Arlington Cemetery in North Windham. Arrangements are in the care of the Windham Chapel of Dolby Blais & Segee, 434 River Rd., Windham, ME 04062.

WINDHAM&#8212;Betty Morey Powell, 88, passed away surrounded by her family on June 19, 2020 at Ledgewood Manor. She was born December 2, 1931, a daughter of Stuart E. and Esther (Haley) Stanley. Betty was an honor graduate of Fryeburg Academy... View Obituary & Service Information

The family of Betty Morey Powell created this Life Tributes page to make it easy to share your memories.

WINDHAM—Betty Morey Powell, 88, passed away surrounded by her...

Send flowers to the Powell family.