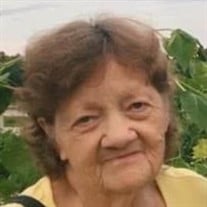 On the morning of Wed. May, 4, 2022, Bertha Mary Drew of Westbrook, Maine left her family for Heaven at the age of 86. Bertha, named after her Grandmother, Bertha Barrows Secord, was born to Isa and Clyde Secord, Sr. on Sept. 6, 1935. She was the baby of a family of 5 children that included 2 girls and 3 boys. Bertha was a lifelong resident of Westbrook, Maine, attended Rocky Hill School, and worked for many years at the Barrett Hospital in Westbrook, Maine where she was well loved. She later worked at Simpson’s Grove in Westbrook which was known for the best hamburgers in town. Bertha married David Alan Drew on Sept. 7, 1962. Though many years later she divorced and went to work at Data General in Westbrook, where she also had many friends, she was most proud to be a Homemaker, raising her two girls to know the values of faith and family. Every aspect of Bertha’s life was touched by her faith in the Lord and was evident in the many virtues she displayed such as love, kindness, generosity, forgiveness, hospitality and humility. This faith was first nurtured in the Salvation Army Church of Westbrook where her mom played a large role and where she acquired lifelong friends who were officers of the Corp. Later, Bertha spent many years as a member of Grace Full Gospel Church in Westbrook, Maine enjoying life with friends who became like family. Most recently, Bertha enjoyed visiting Eastpoint Church when she could. Bertha loved the Bible and spent hours learning through the videos of David Jeremiah and Day of Discovery. Her heart’s prayer, expressed even the week before she passed, was that each of her “kids” (grandchildren and great-children) would also have a relationship with Jesus so that they could be together one day. Bertha was always approachable and welcoming, loved by everyone who knew her. This was evident even in her last days at Springbrook Center when she was always quick to ask everyone else how they were doing. When her children were young, the neighbor kids were frequently at her home to play, eat and spend the night. She had many friends who regularly came for Sunday dinner and others who dropped by frequently for coffee. Her home was your home and at Bertha’s house, one would never go away hungry. Like her Dad, she had a spirit of adventure and enjoyed rides to see the sights. In her later years, she loved studying the clouds and would talk about the day that Jesus would return in just that way. Bertha dreamed of going to Israel and half joked with a nephew who is a commercial pilot about taking her there. Vermont became a special destination. She was thrilled to finally visit the Von Trapp Inn in Stowe for her 80th birthday and got to meet Maria Von Trapp’s Granddaughter. Some of Bertha’s favorite things included her granddog, Boston. It was a mutual affection signaled by tail wagging and licking, since she always brought him treats. Bertha’s favorite flowers were lilacs and Easter Lilies. Her favorite color was blue. Favorite foods included coffee, chop suey, bananas, Hannaford plain donuts, ice cream, whoopie pies and anything lemon. Bertha enjoyed music including any and all Gaither music. She especially enjoyed attending her kids’ and grandkids’ chorus and band concerts in Westbrook through the years. Old tv shows such as Andy Griffith and Lucy were always a hit and in later years, she developed a love of football - only if Tom Brady was playing. Above all, family was everything. She lived to love them and showed it in so many ways. Bertha’s name means “fine lace”. As the Queen of this family, we know it to be true. Her influence will not be forgotten. Bertha is preceded in death by her parents Clyde Clayton Secord, Sr and Isa Crockett Secord; her brothers Clyde Secord, Jr, Robert Secord, and Richard Secord; and her ex-husband David Drew. Bertha is survived by her sisters Barbara Spaulding of Westbrook and Janice Beattie of Windham; two daughters - Victoria Drew and Susan Wheeler and husband, Richard; four grandchildren - Nicole Bello and husband West, Anson Wheeler and partner, Stephanie, Cameo LeClair and husband, Reece, and Joshua Brewer; and three great-grandchildren - Mariah Harmon, Savannah Henson, and Jonah Bello all of Westbrook. Bertha is also blessed with a surviving cousin, Larry Berry of Windham, and many nieces, nephews, and great nieces and nephews. We cannot forget all the other loved family dogs: Barren, Brody, Lucy and Ginger. The family offers the sincerest thanks to the angels at Springbrook Center in Westbrook for their compassionate care in the last weeks, and Gosnell House for providing support and a place for us to gather in the last days. Also, we are ever grateful for her friends Melissa, Susan, and Gretchen from Maine Medical Partners Otolaryngology for the kindness, dignity and caring they displayed to Bertha over many years. She thought the world of all of you. A celebration of her life will be held at Lighthouse Christian Center, 636 Spring Street, Westbrook this Tues., May 10, 2022 at 11:00 a.m. with visitation beginning at 10:00 a.m. Burial will follow at Woodlawn Cemetery in Westbrook. In lieu of flowers, memorial donations may be made to the Animal Refuge League of Greater Portland. P.O. Box 336, Westbrook, ME 04098 (for mail) or For online donations: https://arlgp.org/make-a-gift/donate/ OR Salvation Army, PO Box 1959 Atlanta, GA 30301 (Memo on Check: Portland, ME)

On the morning of Wed. May, 4, 2022, Bertha Mary Drew of Westbrook, Maine left her family for Heaven at the age of 86. Bertha, named after her Grandmother, Bertha Barrows Secord, was born to Isa and Clyde Secord, Sr. on Sept. 6, 1935. She was... View Obituary & Service Information

The family of Bertha Mary Drew created this Life Tributes page to make it easy to share your memories.

Send flowers to the Drew family.